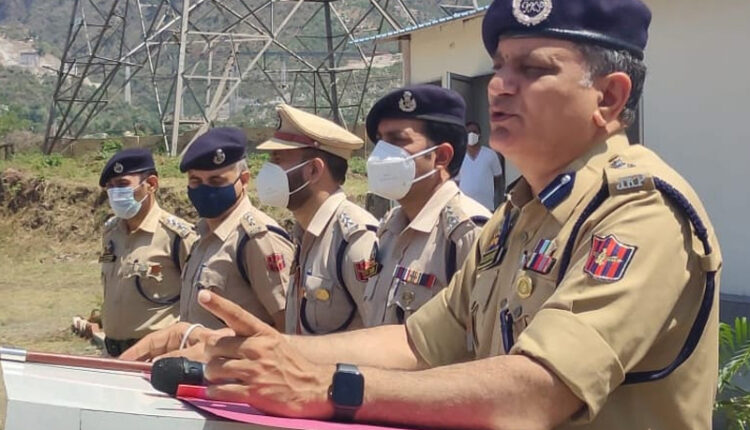 As part of its crack down on absconders, it arrested 40 absconders implementing 52 general warrants of arrest in three months

Reasi: Continuing its drive against absconding criminals who are evading arrests since years and decades, Jammu Kashmir Police in Reasi district in major strike on them arrested 21 absconders during  a series of raids across the Union Territory in the last 24 hours.

With this, the police in the hilly district has created a national record of highest number of simultaneous arrests of absconding criminals within 24 hours under general warrent of arrest.

For this, different teams were constituted and sent to different parts of Jammu zone as well as Kashmir Valley. Tasks were assigned to gazetted officers and non-gazetted officers who accomplished well in apprehending the underground criminals hiding in disguise at different places.

In a rare case, one Mangat Ram of Bakkal was arrested by a team of Jyotipuram police post nearly 34 years in a case of attempt to murder and illegal possession of Arms from his native village. The accused had jumped trial proceedings to avoid conviction and a General Warrent of Arrest under 512 CrPC was issued by Additional Sessions Judge, Reasi on November 27, 1997.

Another Absconder Mashooq Ali, a surrendered militant who was absconding in two cases of murder with weapons registered under provisions of Ranbir Penal Code and Arms Act at Mahore Police Station, was arrested from Tral in Kashmir. On getting clues about the presence of accused in Awantipura area, local police was approached and information was confirmed.

Accused had jumped trial proceedings after getting bail and he could not be apprehended since 2006 as he was hiding in highly militancy infested areas of Kashmir. General Warrants of Arrest under 512 CrPC were issued by Sessions Judge, Reasi. Trial of the murder cases will restart after he is produced in the court of law.

One Jagat Ram of Reasi’s Ward No. 1 was arrested 23 years after he had committed a theft in 1989. Even after the presentation of challan against him, trial of the case registered at Reasi Police Station in June 1989 was still pending for want of his presence in the court. To avoid conviction accused had jumped trial proceedings by going underground and couldn’t be apprehended since 1998. A general warrent of arrest under section 512 CrPC was issued against him by Court of JMIC Reasi on June 1, 1998. By meticulous planning, a team of Reasi Police Station conducted raid and arrested him.

Accused Khadam Hussain against whom a general warrant of arrest under section 512 CrPC was issued by JMIC Reasi on July 20, 1999 was arrested by team of Arnas Police Station from Thakrakote area. To avoid conviction accused jumped trial proceedings and remained underground for the last 22 years.

Another Absconder Wazir Mohd of Prankote, who had been absconding for the last 22 years, was arrested today by team of Reasi Police. A general warrant of arrest under section 512 CrPC was issued against him on July 20, 1999 by JMIC Reasi.

Both Khadam and wazir had been arrested by police after continuous tracking for 8 hours and negotiating steep slopes in Pir Panchal mountain range.

A team of Arnas Police Station arrested an absconder Ram Kumar of Kori Kanthan in Arnas after seven years of his commission of crime, while a team from Bhambla police post conducted raids in Balshama area of Rajouri district’s Sunderbani area and arrested a wanted absconder Mohi-ud-din after 15 years of his commission of crime. The trial court had issued general warrants of arrest against both of them.

Absconder Kishori Lal of Bhatkote Kishtwar was arrested by team of Police Station Reasi from Kishtwar town with the help of Kishtwar Police.

Another Absconder Arjun Kumar alias Totu of Dhanapardhal Katra, who was absconding in two case, was arrested by team of Katra Police Station from Dhanapardhal area of Katra. Accused had jumped trial proceedings by going underground and two General Warrants of Arrest under section 512 CrPC  were issued against him by Sessions Judge Reasi and JMIC Katra in 2019 and 2015 respectively.

A Woman absconding in a murder case arrested by team of Reasi Police Station after eight years being charge sheeted. A general warrant of arrest was issued against her by Sessions Judge Reasi on March 20, 2015.

A team from Pouni Police Station arrested Joginder Singh of Beolian Pouni against whom a general  warrant of arrest was issued by court on June 4, 2019.

Another Absconder Chander Mohan of Barakh Pouni who was wanted in a case registered at Reasi Police Station was arrested from Chandi Morh area in raids conducted by team of Police Station Pouni. To avoid conviction accused had evaded trial proceedings and a general warrent of arrest under section 512 CrPC was issued by CJM Reasi on December 28, 2016.

In another raid, accused Ghulam Rasool of Challad Tehsil Arnas was arrested by a team of Police Station Reasi from Thakrakote area. Ghulam Rasool absconding in case registered at Police Station Reasi. To avoid conviction accused evaded trial proceedings by going underground and a general warrent of arrest under section 512 CrPC was issued by JMIC Reasi on January 22, 2020.

Absconder Kuldeep Singh of Ranot (Bhomag) was arrested by a team of Tote Sahri police post from Surukote area of Arnas in connection with a case registered under NDPS Act. An arrest warrant was issued against him by  the Session Judge Reasi on September 13, 2017.

Riaz Ahmed of Kishtwar who had been absconding in case registered at Katra Police Station was arrested from Padder area of Kishtwar by a team of Reasi Police accompanied by police party from Kishtwar. An arrest warrant was issued against him under section 512 CrPC by JMIC Katra on January 2, 2019.

In this operation Team Reasi remained successful in nabbing the criminals who are evading their arrests since years. A total of 38 general warrants of arrest issued by courts have been executed following the arrest of these criminals in 24 hours.

With the arrest of 40 absconders, 52 two general warrants have been executed in last three months by Reasi Police since Shailender Singh took over the charge of SSP Reasi in last week of March this year.

ADGP Jammu zone Mukesh Singh and Suleman Choudhary DIG Udhampur Reasi Range have complemented the police officers and their teams in Reasi and asked them to continue working with same zeal and enthusiasm in curbing down the crime in the district.

From PM Modi to his predecessors, all of them worked to improve relations with neighbours. Atal Ji (former PM Atal Bihari Vajpayee) in fact, once said, “Friends can change, not neighbours”: Defence Minister Rajnath Singh in Leh