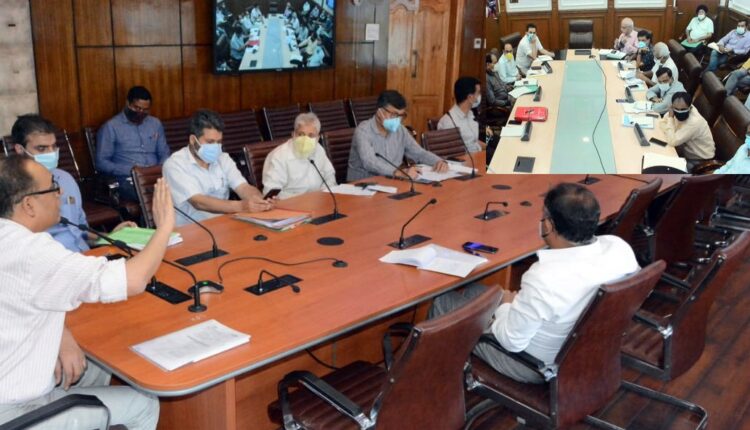 Srinagar: The Principal Secretary Power Development Department (PDD), Rohit Kansal on Saturday exhorted senior field officers of the department to lead from the front and ensure immediate restoration of full power supply to the Jammu region in the wake of the damages caused to power infrastructure following strong winds and rain.

He was reviewing the status of power restoration works post heavy rains and strong winds that uprooted several poles and damaged other power infrastructure. Addressing the officers, he directed them to ensure 100 per cent restoration of power supply system by today evening (July 03). He was informed that a number of trees and over 300 poles were uprooted due to strong winds in the region leading to a disruption in the power infrastructure. He was further informed that restoration works had started immediately and over 80 per cent of the work had been completed.

Emphasizing that the departmental officers had the skills and the competence to make a difference, Kansal asked them to personally attend to restoration, identify problems in the system and ensure that the same were rectified without any delay.He also warned that any laxity would invite action and that responsibility and accountability would be fixed for any delays or laxity and also for undue or unscheduled power outages.

While discussing the power supply position, he directed that in order to ensure smooth functioning of power grid stations and to ensure effective regulation, sub-divisional officers of sub transmission wing would be deployed at all grid stations during peak hours. Similarly, sub-divisional officers of the distribution wing too would remain available at their respective stations, he said. He directed that all details of the officers deployed be widely publicized so that officers could be contacted by the public in case of any difficulty.

He also asked the concerned officers to ensure that information of approved power shutdowns be given well in advance and widely publicized through social media and official handles of the department so that general people are kept well informed.

While stressing on maintaining a prompt public grievances system, the Principal Secretary instructed that all grievances received through any media should be promptly addressed. If the full resolution of a problem would involve some time, an intern reply indicating the likely time of redressal should be given, he maintained.

He also instructed that intensive inspections without fear and favour be conducted regularly against illegal power connections and stringent action including disconnections and all legal action be taken against those using electricity illegally besides disconnection of all illegal connections.

The Principal Secretary impressed upon the concerned to prepare a list of defaulters to be displayed prominently while also calling for strict action against such defaulters.

Stressing on providing scheduled power supply in all areas, the Principal Secretary said each division should ensure that maintenance works needed to keep the system running smoothly were carried out on a regular basis. In this connection, he laid special emphasis on LT network maintenance.

Harassment To Parents: JKBOSE Suspends Its Facilities To Seven Schools