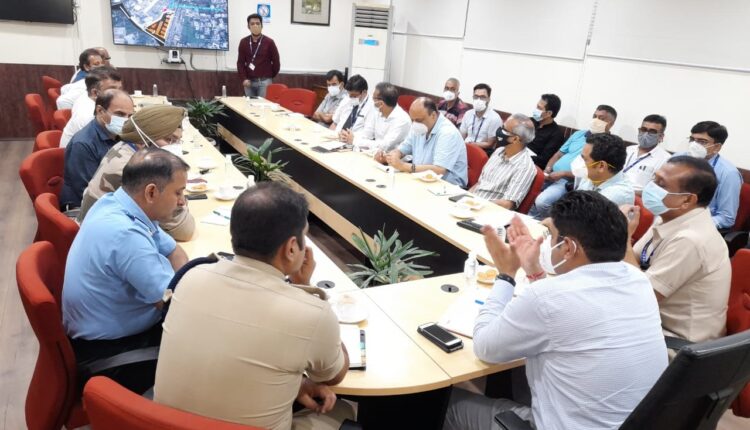 Authorities hopeful to operationalise the flights from July end

Jammu: Divisional Commissioner, Jammu, Dr Raghav Langer on Saturday chaired a coordination meeting to review progress of works regarding night landing of flights at Jammu Airport, expansion of airstrip, commissioning of parking area, expansion and other works at Civil Airport at Jammu.

Director Airport Authority of India (AAI) gave a powerpoint presentation and briefed the Chair about the physical achievements of the works and bottlenecks.

The Div Com directed the District Administration to start the process for acquisition of 1044 Kanal land for the construction of New Terminal at Beli-charana.

The Divisional Commissioner also directed the concerned officers to kick start the process for giving the possession of remaining 17 Kanal land out of 27 Kanal land adjacent to CAT-1 area. The 10 Kanal land has already been taken over by AAI, which has been developed as the new car parking area. The new car parking with capacity of 150 cars shall be operational from October this year.

Regarding the operationalisation of night landing of flights at Jammu Airport, the Chair instructed the concerned departments to make proper arrangements for lighting and back up to facilitate smooth landing of the Aircrafts.

The night landing facility is the runway approach lighting system, which includes a series of light bars with strobe lights installed at the end of the runway. This runway system equipped with the Instrument Landing System (ILS) has already been installed and commissioned at Jammu Airport. Besides ILS, it is important to have lighting along the runway edge, so that pilots landing at night are able to make visual contact and align the aircraft with the centre of the runway.

The Div Com also reviewed in detail progress on various components of expansion of Jammu Airport and directed the concerned departments to early complete the works executed by their respective departments. The additional 1300 feet long airstrip work is scheduled to be completed by 31st August, 2021.

The Div Com instructed the concerned department to cover the Landoi Choi Nallah and put barricades at both ends of the Nallah for security purposes.

He further discussed the security related aspects of the Airport with SSP Jammu, Chief Operations Officer of the Airforce & officials of CISF.

Director Geology & Mining, J&K who attended the meeting was asked to provide adequate supply of construction material for the completion of ongoing works in stipulated time frame.

The operation managers of various airline fliers like Go air, Air India, Vistara, Indigo, Spicejet who were present in the meeting discussed their issues with the Div Com. At present around 17 flights are being handled in the Airport which shall increase with the night flying facility. Additionally, 30% load penalty which is being paid by the airliners at present shall also get waived off in future once the airstrip expansion is notified.

The Div Com mentioned that due to the efforts of the incumbent Government, long pending demand of Jammuites for night operations of commercial flights is going to be fulfilled shortly. This will also give special boost to the tourism sector in the region.

Among others, senior officers from Geology and Mining, Police, UEED, JMC, JKPTCL, Jal Shakti, District Administration besides representatives of AAI were also present in the meeting.