Two held under PSA in Banihal 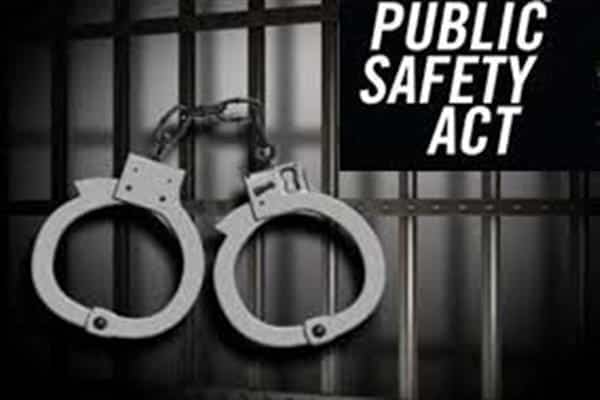 Ramban: Two persons were detained on Tuesday under the stringent Public Safety Act (PSA) for their alleged involvement in unlawful and anti-national activities in Jammu and Kashmir’s Ramban district, sources said.

A police team served two hardcore criminals with notices under the PSA in Banihal area and later detained them and sent them to Jammu-based Kotbalwal jail, they said.

The detained persons have been identified as Tariq Ahmad Dar, a resident of Hollan Banihal, and Tanvir Ahmad Choudhury alias Jimmi of Banihal, the officials said.

Dar is a political activist, while Choudhury is a shopkeeper, they said.

The superintendent of police, Ramban, submitted dossiers against the duo recommending cases for detention of the duo under the provisions of Jammu and Kashmir’s Public Safety Act, 1978, the officials said.

The dossiers stated that the duo was reportedly involved in anti-national and anti-social activities, and in the law and order problems in Banihal. They attempted to promote enmity between two religious groups, which in turn could have lead to violence and hatred between them, the dossiers said.

They were involved in anti-national activities within the jurisdiction of Banihal police station, and its surrounding areas.

They were also involved in organising ‘bandhs’ in Banihal area on the instance and call given by Hurriyat leaders from the Kashmir Valley, the dossiers said.

They were also instigating the people of the Banihal area, especially the youth against Jammu and Kashmir, and the government of India, it said.

Both are involved in unlawful activities and a number of other cases registered at Banihal police station.

The dossiers also point their involvement in attacks on vehicles of Amarnath yatris on the highway in the area a few years ago.

The district magistrate issued orders of detention on the dossiers of police, who executed the detention warrants on Tuesday, they said.

LIFE OF CIVILIANS AT LOC