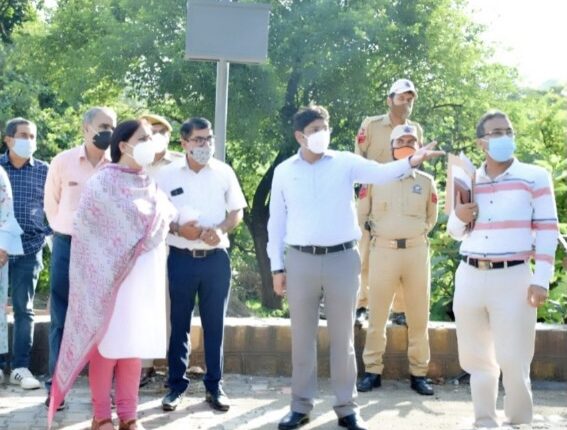 During the tour, the Divisional Commissioner accompanied by Deputy Commissioner, Udhampur Indu Kanwal Chib; visited the Historical Krimchi Temple. He directed the DC to resolve all the minor bottlenecks which are hampering the work progress on approach road so that the ongoing construction works can be completed at an earliest. He directed the concerned departments to give the aesthetic look to the surroundings of Krimchi Temple and develop the area in landscape to attract more tourists there. He instructed them for illumination of the temple buildings with lighting, artificial waterfall and other development works required there.
He also passed directions to the concerned authorities for beautification of the bridge on the approach road to the temple.
To assess the latest progress of ongoing developmental works of pollution abatement of river Devika and Tawi project under National River Conservation Plan (NRCP), being executed by UEED. The Divisional Commissioner also visited Devika Ghat site where he inspected the progress of ongoing development works.
While inspecting the ongoing works, Dr Langer took strong note of the delayed works and directed the UEED to gear up men and machinery and complete the ongoing works within stipulated time frame. He directed the concerned officers to take effective steps for timely completion of this prestigious project on a mission mode for maximum results on the ground by resorting to double shifts. He stressed on early completion of civil, sewerage works simultaneously and executing agencies were directed to increase the IWC slots.
While reviewing the phase wise progress of ongoing developmental works of the prestigious project, he directed the executing agencies to ensure quality standards. Executing agencies were also asked to restore excavated areas immediately after execution of work and permanent restoration of roads where pipes have been laid down expeditiously so as to avoid any inconvenience to the public. The Executive Engineer was asked to set up an institutional mechanism for restoration of sites where sewage pipes are laid especially in narrow lanes.
Later, the Div Com chaired a meeting with officers of various departments at Conference Hall DC Office Complex Udhampur and reviewed the phase wise latest progress of Devika project.
The Div Com directed the DC Udhampur to develop parking sites and other beautification works.
The Div Com strongly directed UEED to ensure completion of all the pending works within stipulated time frame.
He also directed UEED to analyze the survey and drawings of the connection and ensure that the targeted discharge is achieved by the sewerage team.
He directed for follow up the contract management steps, issue panelty notices.
The Divisional Commissioner remarked in the meeting that the approach of management consultancy seems to be very unprofessional and all necessary steps that are part of the contract management does not seem to be timely and properly taken up.He directed the UEED to seek the details of design issued for further action to be taken thereon.
The Div Com directed the consultant to manage the contract professionally. The Div Com issued various Instructions for additional works like double lanning of entrance from north ghat,widening of bridge near cremation ghat, existing tree line can be used as division between the two lanes of the entrance road, incomplete construction of karam shed to be turned into meditation centre with glass construction etc.