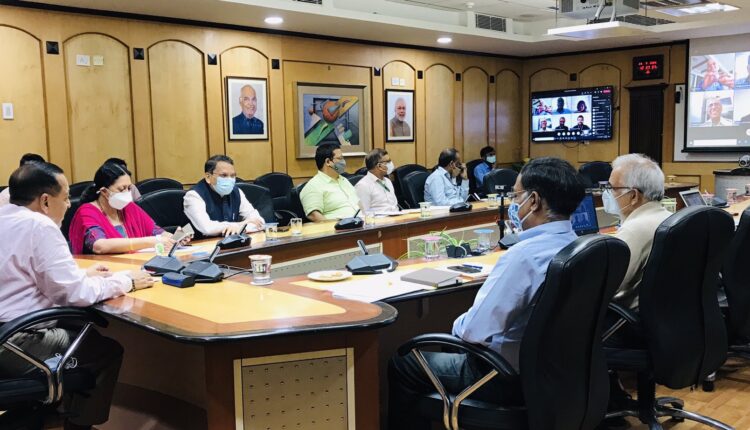 NEW DELHI: Union Minister of State (Independent Charge) Science & Technology; Minister of State (Independent Charge) Earth Sciences; MoS PMO, Personnel/DoPT, Public Grievances, Pensions, Atomic Energy and Space, Dr Jitendra Singh said Science and Technology is key to “Atmanirbhar Bharat” envisaged by Prime minister Narendra Modi. He hoped that the confidence of self-reliance will percolate down to the next generation and will help attracting the best brains in the field of Science and Technology.
Dr Jitendra Singh was speaking after releasing a Review Committee Report on International S&T Cooperation prepared under the leadership of Dr Anil Kakodkar, former Chairman of Atomic Energy Commission of India.

The Minister said that India is already a global power so far Science and Technology is concerned, but at the same time he called for streamlining and exploiting the huge untapped potential in tune with Prime Minister’s mandate that scientific endeavour should be citizen-centric. He said, diversification should be taken as an advantage as very few countries are endowed with diverse resources.
Dr Jitendra Singh said today India has Science and Technology cooperation with 44 countries and this list will be expanded in coming days and months. He also called for subject based, rather than Ministry based projects to achieve fruitful outcomes within stipulated time.
The Minister also underlined the need for bringing more and more domain experts in international cooperation and at the same time remain deeply connected with domestic arena. He said, we have to go beyond the realm of Science and Technology to achieve the true potential of such cooperation.
Dr Jitendra Singh said that very soon, a new exercise will be initiated to hold brainstorming of each of the Ministries and Departments of Govt of India with the Ministry of Science & Technology,Ministry of Earth Science and CSIR. He recalled that over five years back, on the intervention of Prime Minister Narendra Modi, an extensive brain-storming exercise was held in the national capital wherein representatives from different Ministries and Departments were engaged in an intense interaction with scientists from ISRO and Department of Space in order to work out how best space technology could be utilized as a modern tool for supplementing, improving and expediting infrastructural development as well as implementation of various welfare schemes. Following this, he said, space technology is now being used in diverse sectors including Railways, Roads and Bridges, Medical management/telemedicine, procurement of timely Utilization Certificates, disaster forecast and management etc.
Dr Jitendra Singh asked the scientists of different Ministries and Departments to further enhance collaboration in the field of Research & Development and step up activities and collaboration with industries and corporate houses. He pointed out that while different Science Ministries are making note-worthy contributions to nation building, they should not be working in isolation. He said, COVID taught us more about the value of coordination and collaboration not at the domestic level but also on a global scale.
Dr Anil Kakodkar, in his address, said, India has a long track record of International Cooperation in Science and Technology. He said, cooperative and competitive spirit go together in such kind of cooperation which has multiple benefits.
Secretary DST Prof Ashutosh Sharma, Secretary DBT Dr Renu Swarup, Secretary Ministry of Earth Sciences, Dr. M. Rajeevan, DG CSIR Dr Shekhar Mande and other senior officers of the Ministries took part in the meeting.

CAA & NRC haven’t been formed against any citizen of India. Indian Muslims will face no loss due to CAA. After partition, assurance was given that we’ll take care of minorities of our country. We’re abiding by that till today, Pakistan didn’t: RSS Chief Mohan Bhagwat, in Guwahati