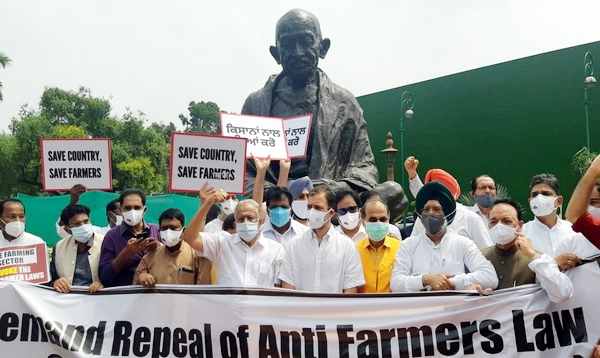 NEW DELHI : Several Congress leaders, including former party president Rahul Gandhi, staged a protest against the Centre’s farm laws in front of the Gandhi statue in the premises of the Parliament on Thursday.
The protest was staged by several MPs of the Congress’ Punjab unit. “Save country, save farmers,” read the placards that were raised.

Earlier in the day, Congress MPs gave adjournment motion to Lok Sabha to discuss the farm laws today, in the monsoon session of the Parliament. Party MPs Deepender Singh Hooda and Pratap Singh Bajwa have also given a suspension of business notice in Rajya Sabha over the farmers’ agitation.
Meanwhile, farmers who have been protesting at Delhi’s borders for the last six months, are scheduled to protest at Janta Mantar today to demand the repeal of the three laws that were passed last year by voice vote despite opposition from other parties.
Delhi Police permitted farmers to hold the demonstration at Jantar Mantar after they took an undertaking from them that the farmers would not march towards Parliament which is currently in session.
Farmers have been protesting on the different borders of the national capital since November 26 last year against the three newly enacted farm laws: Farmers’ Produce Trade and Commerce (Promotion and Facilitation) Act, 2020; the Farmers Empowerment and Protection) Agreement on Price Assurance and farm Services Act 2020 and the Essential Commodities (Amendment) Act, 2020.
So far, several rounds of talks have been held between the Centre and farmer leaders to break the deadlock between the two parties. (Agencies)