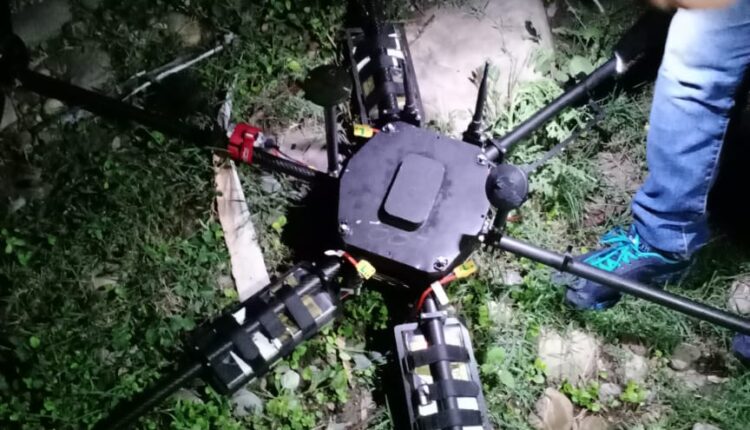 Jammu: Ahead of three day visit of President Ram Nath Kovind, Jammu and Kashmir Police in a major success against terror, shot down a Pakistani drone during wee hours of Friday in Gurha Pattan area of Akhnoor in the Union Territory.

The drone, which was carrying a 5 kg IED from Pakistan side, had flown nearly 7-8 kms inside the Indian area from the Line of Control. Lashkar-e-Toiba is suspected to be behind it.

A senior police officer confirmed the shooting down of the drone.

Meanwhile, Additional Director General of Police Mukesh Singh said that the drone was shot down by a police party who had already laid down a naka in the area following specific tip off.

The IED was wrapped in a packet and it had to be dropped somewhere in the area, where terrorists or their associates might have been waiting to collect it. The terrorists had to only connect its fuse with the wires before planting it at some crowded place, he added.

The police later exploded the IED, he said. The string through which the IED was to be dropped from the drone was the same recovered after attack at IAF station, he said, adding that it shows that the explosive devices at the IAF station too were dropped through drone.

On Wednesday only, a drone was sighted flying over the area near Civil Airport at Satwari. It has on one side IAF Station which where Lashkar-e-Toiba carried out the drone attack last month, damaging roof of a building and causing minor injuries to two persons.

There have already been incidents of dropping of arms, ammunition and explosives by drones from Pakistan. However, drone attack at IAF facility is Jammu last month was the first ever terror attack of its kind in India.

Ever since, the drone attack at IAF facility in Jammu, drone sightings in Jammu and its outskirts have almost become a regular feature. Late last month, army had fired on a flying object seen hovering over the Kaluchak, Ratnuchak military stations.

Drones were also spotted trying to enter the Indian side from across the international border in Arnia sector on two separate occasions. However, both times, alert BSF personnel opened fire making them to return to Pakistan side.