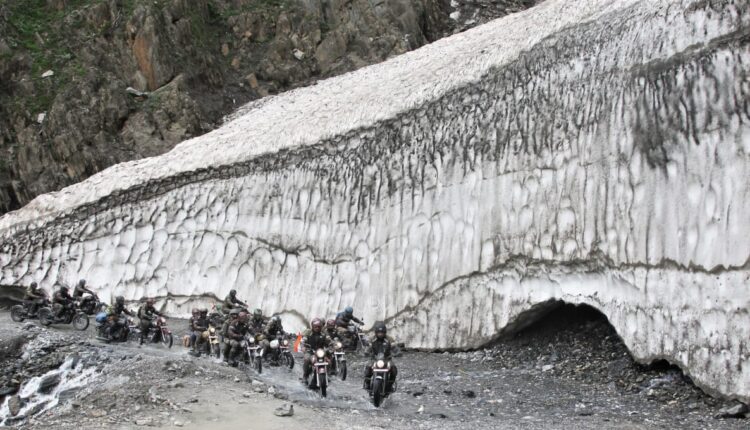 Udhampur: The Bike Rally, Dhruva Bike Ride in the honour of Kargil Vijay Diwas comprising of 75 motorcycles commenced on 22 Jul 2021 under the aegis of Headquarter Northern Command. Lieutenant General YK Joshi, UYSM, AVSM, VrC, SM, ADC, Army Commander, Northern Command, who is himself a Kargil war veteran and a gallantry decorated officer, has made an exceptional endeavor to commemorate the supreme sacrifice and unmatched warrior spirit.

The Army Commander said, “My past tenures in Ladakh have endeared me to its people and this landscape and each time I am here it fills me with love and admiration for the local populace which has stood steadfast and shoulder to shoulder with Indian Armed Forces to repel any offensive to the land of their forefathers. It is this deep sense of patriotism and passion that permeates to every soldier who stands vigil here on these wind-swept icy heights in most inhospitable weather and terrain that their efforts are recognized by the people they are protecting.

I pray for peace and prosperity for the people of Ladakh and at the same time I promise them that we are here and shall always be their sentinels”.

This was an onerous endeavor by the JAWA Classic Legends Bikes to immortalise the gallant spirit of the Indian soldiers amongst the ‘Awam’ of entire J&K as a reminder of their unflinching dedication towards our country and flag. During this magnificent journey the Indian Army has sent a message to the entire nation that the Indian Army stands tall on the frontiers and that the tricolour flutters with the breath of each fallen soldier, who has always responded beyond the call of duty. This initiative has evidently highlighted the fact that JAWA Classic Legends Company stands with Indian Army and supports the noble cause of defending the nation by paying a befitting tribute to the fallen heroes of Kargil War.

The riders made an unbelievable impression in the hearts and minds of the people of the Valley. Srinagar being the mid point of the ride and convergence venue for the segments, they regrouped to further spread the message along the folds of Sonmarg, Zozila right upto the pious battle field of Drass. The Army Commander, Northern Command led the ride of 75 Motorcycles till Drass and the ride was flagged in by the Maj Gen Nagendra Singh, YSM, SM, GOC, 8 Mountain Division and the air was filled with nostalgia for one and all, as the Drass War Memorial brought back to life the saga of guts and glory of the past.

The four segments of the rally which commenced from four locations of Udhampur, Srinagar, Leh and Nowshera converged at Drass “Kargil War Memorial” to pay homage to the Kargil War heroes. The bike rally is a symbol of dedication, devotion and an onerous tribute from Northern Command to the warriors of Kargil of the Indian Army by leading the Udhampur segment of the rally.

Another aircraft shaped balloon with PIA written on it recovered from Krishna Ghati sector of #Poonch. Infiltration attempts continues from across.