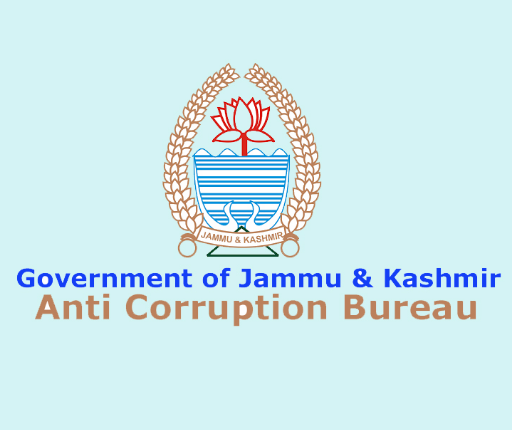 DODA: Anti Corruption Bureau (ACB) on Tuesday said that they have trapped and arrested Arshad Amin, a Junior Engineer of Rural Development Department, Doda for accepting a bribe.

A complaint was received that one Asif Ahmad Chandel BDO Changa, Mansoor Ahmad Gram Rozgar Sewak (GRS), Block Changa and JE Arshad Amin are not releasing his final payments against which the complainant has finalized public works under MGNREGA in Block Changa, Tehsil Gandoh, district Doda.

When the complainant approached BDO with a request to release his payments the BDO asked him to first meet the concerned GRS and JE first then he will release the payment of said works. On meeting the GRS Mansoor Ahmed, the complaint was asked to pay a bribe of Rs. 12,000/- for each work so that his payment could be released, whereas the JE Arshad Amin demanded Rs. 17,000/- as bribe from the complainant to process his case.

It was stated in the complaint that the complainant had already paid Rs 10,000/- to the GRS as demanded by him but the GRS still refused to perform the work of complainant until he was paid in full.

Based upon the facts disclosed in the complaint which prima facie constituted an offence under section 7 of the PC Act 1988 r/w Section 120-B IPC, an FIR No. 06/2021 was registered in P/S Central ACB, J&K on 26.07.2021 against the accused persons namely BDO Changa, Asif Ahmad Chandel, Mansoor Ahmad Gram Rozgar Sewak (GRS), Block Changa and JE Arshad Amin. A trap team was constituted whereupon the accused JE Arshad Amin was caught red handed while accepting the bribe of Rs. 17,000/-. He has been arrested in the case. Gram Rozgar Sewak is absconding and all efforts are being made for his sustained investigation.
Further investigation in the case is under progress.