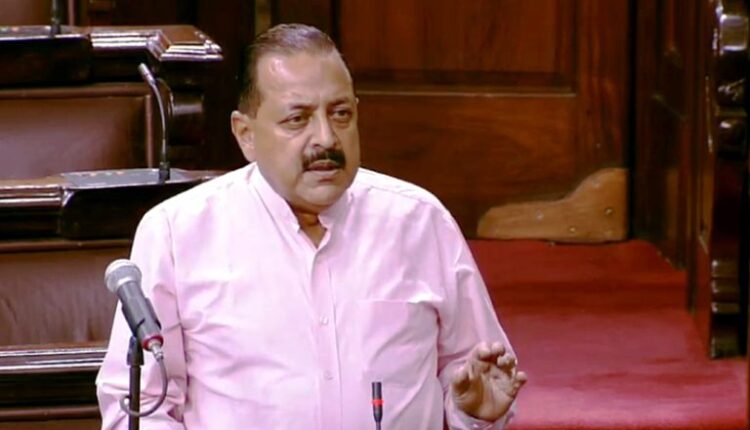 NEW DELHI, July 29 : Union Minister of State (Independent Charge) Science & Technology, Minister of State (Independent Charge) Earth Sciences, MoS PMO, Personnel, Public Grievances, Pensions, Atomic Energy and Space, Dr Jitendra Singh stated in the Rajya Sabha today that the Modi government is committed to encourage private participation in the Space sector. He further informed that the Space Activities Bill is under active consideration of the Government, which will include aspects pertaining to regulation and promotion of private players in the space sector.
In reply to a question, the Minister disclosed that the Government is in the process of creating an ecosystem to encourage more private participation in indigenous production of space technologies, services and devices. Space sector reforms were announced in June 2020.

The Minister’s reply further elaborated that the Indian National Space Promotion and Authorization Centre (IN-SPACe) was created as an independent nodal agency under the Department of Space with the mandate of promoting, handholding, licensing, authorization and monitoring of private space activities in India. Access to Department of Space (DOS) facilities and expertise are extended to private entities to support their space activities. Announcement of Opportunities were done offering challenges in new domains of space technology.
The Government of India is encouraging transfer of technologies developed in the field of Space to Indian industries. Apart from this, Government is also bringing in new sector policies and guidelines, and also revising existing policies.
IN-SPACe which is under creation will have Safety and Security Directorate to ensure security of ISRO installations when allowing access to private entities, informed Dr Jitendra Singh. Public consultations were done and the relevant Departments and Ministries were consulted.
An exclusive webinar in ‘Unlocking India’s potential in space sector’ consisting of four sessions covering the four vertical of space programme were organised with the participation of Industrialist/Academia/Start-ups as well as the general public. All suggestions have been taken into consideration and appropriately addressed.
In reply to another question, Dr Jitendra Singh informed that ISRO is capable of imaging the whole country 4-5 times daily. In addition to natural disasters, EOS-03 would also enable monitoring of water bodies, crops, vegetation conditions, forest cover changes etc.
The House was also further informed that the first developmental flight of the Small Satellite Launch Vehicle or SSLV is scheduled in the fourth quarter of 2021 from Satish Dhawan Space Centre, Sriharikota. ISRO’s vast experience in Solid propulsion and heritage of proven design practices has enabled SSLV to be developed as a cost-effective, three stage, all-solid launch vehicle with a payload capability of 500 kg to 500 km planar orbit or 300 kg to Sun Synchronous Polar Orbit.

Lieutenant Governor, Manoj Sinha attended the “Vishal Pashudhan Vyapar Mela” at Hiranagar, Kathua. The first of its kind event in the UT will provide a major fillip to Animal Husbandry sector with additional source of income to the farmers: Office of LG J&K