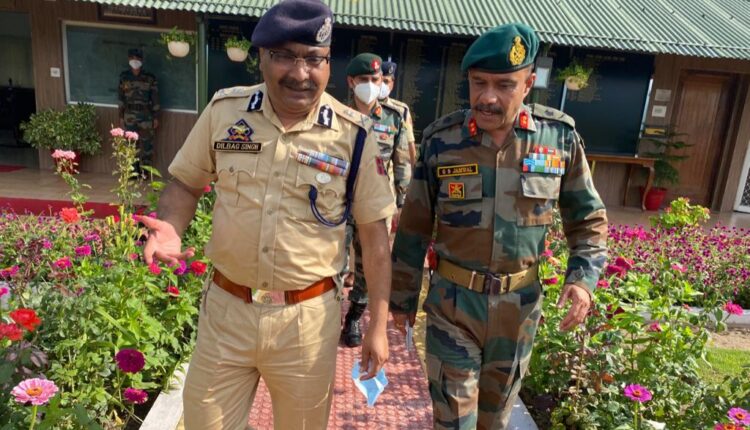 He also visited Delta Force Headquarters at Dharmund and held meeting with the GOC there. The DGP J&K who was on a day long visit to Kishtwar first had an aerial survey of the flash flood hit area at Hounzar, Dachan to take stock of the situation of the area. Afterwards, the DGP visited Kishtwar where he was received by DIG DKR, Shri Udayabhaskar Billa and SSP Kishtwar Shri Shafqat Hussain, ASP Doda Shri Abdul Qayoom and other officers. Immediately after his arrival at Kishtwar, he visited Martyrs memorial and paid floral tributes to Martyr DSP Shri Aman Thakur and other martyrs.

While addressing the meeting the DGP stressed for intensifying the rescue operation to trace the missing persons. He directed the officers to provide all necessary support and help to the affected people of the village. While seeking reports regarding the loss and damage in the village, the DGP emphasized upon the officers that besides, the efforts of administration, involve the local community members for rehabilitation of the affected families.

The DGP directed the officers to intensify the war against drug peddlers and root out the menace from the society saying that it is the matter of concern as youth are getting involved in the menace. He stressed upon officers to take all the necessary and required measures to check drug abuse in society and called for stern action against those involved in drug trafficking.

The DGP directed the officers to strengthen the anti-terrorist measures to finish the terrorism and curb heinous activities of terrorists. He stressed for enhanced cooperation between police and other security forces on ground to foil the ill intentions of terrorists and their masters. The DGP directed for setting up the surveillance teams equipped with latest technology to monitor and smash the supply of money and arms to the terror groups. He emphasized to adopt the latest techniques and standard practices to expedite the probe into terror crime cases. Shri Singh impressed upon the officers to ensure the expeditious disposal of all pending terror crime cases and directed them to conduct investigations efficiently so that culprits do not go scot-free.

Stressing for increased patrolling, the DGP said all the suspicious elements should be kept under check to foil their evil attempts. He directed the officers to keep CCTV network up to date and added that it is a very useful tool to monitor the crimes. He also emphasized upon the officers to involve the religious leaders in community policing. He later inaugurated COVID care facility at DPL Kishtwar.

On this occasion the officers briefed the DGP J&K regarding the overall security scenario of the Kishtwar District.

While speaking to the media, the DGP said soon after the flash flood hit the Hounzar, Dachan village JK Police, Army, SDRF, NDRF and Civil administration swung into action and reached the spot and provided the immediate and necessary help and assistance to the affected families. Seven bodies were recovered and seventeen trapped persons were evacuated and shifted for medical treatment and added that rescue teams are trying hard to trace out the remaining missing persons.

Asserting that Pakistan-based Lashkar-e-Taiba (LeT) and Jaish-e-Mohammad (JeM) outfits are behind the dropping of arms, IEDs and narcotics by drones in Jammu and Kashmir, DGP said counter measures are in place and these would be further strengthened to defeat any conspiracy against peace. He said that stone pelting in Kashmir has almost ended and added that this was not only by the efforts of law enforcement agencies but largely because the youth of Kashmir have understood the evil intentions behind it.

The DGP later in the afternoon visited Delta Force Headquarters at Dharmund where he was received by General officers Commanding, Major General G.S Jamwal. The officers discussed the security scenario of the area and highway security measures. The GOC briefed the DGP regarding the functions of the counter terrorism grid in Doda, Kishtwar and in Ramban areas. DIG DKR was also present during the meeting.

Mayank Agarwal ruled out of the first Test against England after showing signs of concussion following a blow to the helmet during a nets session.