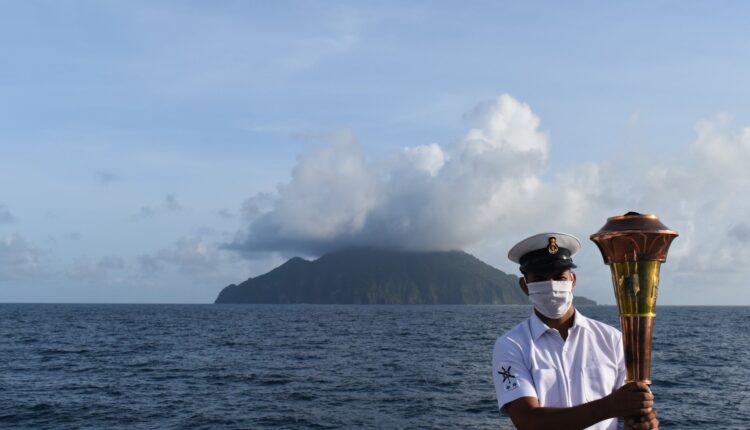 The Victory flame of Swarnim Vijay Varsh, commemorating the 50th anniversary celebrations of India’s victory in the 1971 war, travelled through the Andaman & Nicobar Islands chain. Onboard Indian Navy Landing Craft Utility (IN LCU) 58, accompanied by INS Saryu and IN LCU 54, the flame was routed via Narcondam, the Easternmost Island of Andaman & Nicobar Islands. The flame also sailed past the Barren Island, India’s only active volcano. The volcano spewed gas/lava as the flame sailed past the Flat Rock, an islet during low waters.


The victory flame will reach Hut Bay where it will be kept for public viewing and other events under the aegis of Indian Coast Guard. On completion of a day’s public viewing at Hut Bay, the flame will return to Port Blair for the Independence Day parade at Netaji Subhash Chandra Bose Stadium. After the Independence Day celebrations, the flame will begin its next phase of transit to the Southern Group of islands on the evening of August 15, 2021.

A Mountaineering Expedition has been launched by #IndianArmy to simultaneously scale five virgin peaks in Teram Shehr Glacier near #Siachen. The Expedition was flagged off by Chief of Staff, Fire & Fury Corps from the #Siachen Base Camp.

Punjab Minister Vijay Singla arrested by Anti-Corruption Branch. He was sacked by CM…

President Ram Nath Kovind has appointed Vinai Kumar Saxena to be the Lt. Governor of…