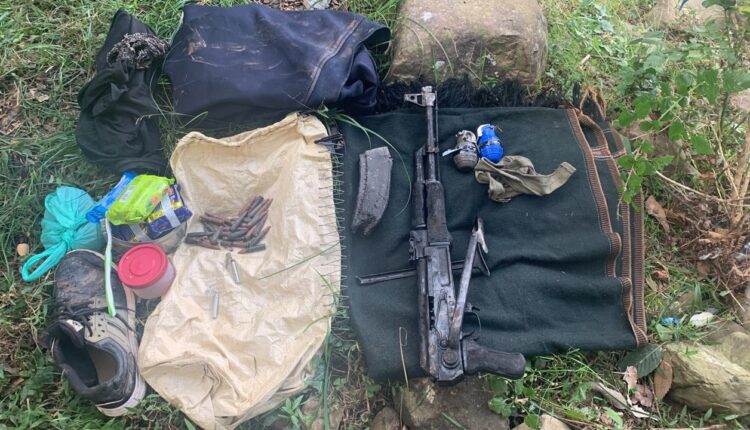 JAMMU, OCTOBER 26: Army troops and Jammu Kashmir Police on Tuesday smashed a militant hideout in the forests of Bhata Durian in Poonch district’s Mendhar tehsil and seized arms and ammunition among other things there.

The seizures, according to police, included an AK rifle along with magazine and 29 rounds, two grenades, four biscuit packets, sling, socks, full sleeve T-shirt, a Reebok jacket, blankets, tiffins, two pair of shoes, one single shoe, two detonators and two syringes. The hideout appears to have been abandoned before the arrival of security forces and police there, a senior police officer said, adding that this confirms that militants are still holed up in the area and have not escaped.

Meanwhile, police have apprehended three Mendhar residents from Uttar Pradesh.  Identified as Mohammad Noor alias Noori of Gulhutta, Mohammad Rashid and Yasar Arafat, both residents of Bhata Durian, they were on way to Kathmandu to board a flight for Saudi Arabia, sources said, adding the police suspect them to be having links with militants holed up in the forests in Bhata Durian area.

When security forces launched searches in the forests, they proceeded to Nepal to catch a flight for Saudi Arabia to avoid arrest, sources said. They have been brought back to Mendhar and their questioning was in progress.

Earlier, police had detained ten people including a 45-year-old woman and her son on suspicion of providing logistics to militants. Sources said that their questioning was still in progress.

On Sunday morning, two security forces jawans and a police man were injured and a jailed Lashkar-e-Toiba militant Zia Mustafa of Pakistan killed in firing with militants in Bhata Durian forests. The slain militant was suspected to be in contact with militants hiding in the forests and he was taken out of Kot Bhalwal jail on transit remand from a Shopian court to take them to the militants hideout in Bhata Durian forests, sources said.

Volcano building up in J&K; Farooq Abdullah on celebrations over Pak win in Kashmir