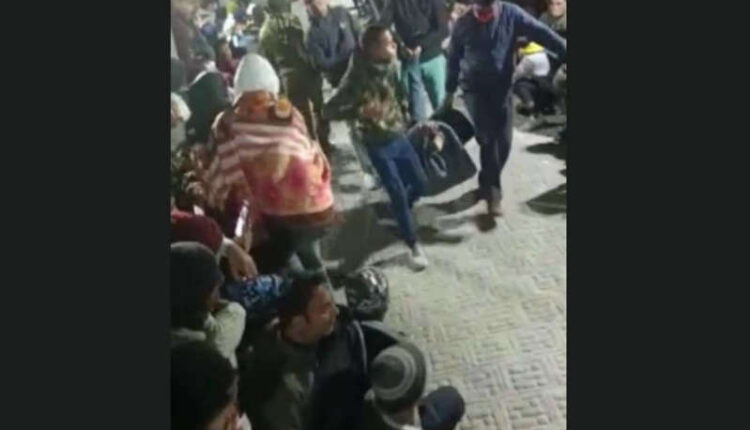 KATRA, JANUARY 1: Twelve pilgrims were killed and 16 others injured in stampede on first day of the new year at Mata Vaishnodevi Shrine in Trikuta Hills near Katra town of Jammu and Kashmir during wee hours of Saturday.

It was the first ever stampede in the area where number of pilgrims visiting the shrine to pay obeisance prior to outbreak of COVID pandemic had even crossed one crore mark.

The Lt Governor Manoj Sinha ordered a high level enquiry by three member team into the incident. Led by Principal Secretary Home, it will have members in Divisional Commissioner Jammu and Additional DGP Jammu.

Pointing out that the three member enquiry committee will submit its report to the Government within a week’s time, an order issued by UT’s General Administration Department late this evening said that it will examine in detail the causes/ reasons behind the incident, point out lapses and fix the responsibility thereof, besides suggesting appropriate SOPs and measures for preventing recurrence of such incidents in future.

LG, who also happens to be the chairperson of Shri Mata Vaishno Devi shrine Board which regulates the yatra, announced an ex-gratis of Rs 10 lakh to the next of kin of each deceased and Rs two lakh to each injured.

He also visited the injured at Narayan Super Specialty Hospital and instructed the doctors and administrative staff to provide best possible treatment to them. He said that ten of the bodies have been dispatched to their respective native places, while other two will be sent on Sunday morning. About the injured, he said that nine have been discharged.

Prime Minister Narendra Modi also announced Rs two lakh ex-gratia to the next of kin of each deceased and Rs 50,000 to the injured. He condoled the loss of lives and added that he had spoken to Jammu and Kashmir LG Manoj Sinha, Ministers Jitendra Singh and Nityanandra Rai and taken stock of the situation. “Extremely saddened by the loss of lives due to a stampede at Mata Vaishno Devi Bhawan. Condolences to the bereaved families. May the injured recover soon,” he said.

Union Minister in the PMO, Dr Jitendra Singh, visited Katra to take stock of the situation, as also the injured in the hospital. Leaders from various political parties, social and religious organizations too reached there to enquire about the victims.

Officials attributed the stampede to an altercation between two groups of pilgrims on a pathway leading to the shrine complex. The police and officials from Shrine Board were quick to respond and the order in the crowd was immediately restored, but by that time damage had been done, they added.

Eyewitnesses, however, said that first stampede, a small one, took place in old Bathing Ghat area near the shrine around 8.30 pm when a group of 15-20 pilgrims suddenly created a circle pushing other people saying that their mobile phones have been lost. Some people especially children were injured in it, said one Mukesh Singh of Bhagpat from Uttar Pradesh who was present on the occasion.

Nearly five hours thereafter, the second stampede took place in an area falling between Gate No.3 and the junction of tracks from Sanjichatt side and Adh Kunwari side near shrine. Nearly 50,000 – 70,000 people had already assembled there including the Shrine Complex against its total capacity of accommodating not more 20,000 people at a time.

Shri Mata Vaishno Devi Shrine Board in a statement late in the evening said that it had allowed 35,000 pilgrims to proceed for the yatra on December 31 and for January 1 against the cap of 50,000 Harris per day put by the National Green Tribunal.

Significantly, as per COVID containment guidelines issued by the State Executive Committee of the UT’s Department of Disaster Management, Relief, Rehabilitation & Reconstruction in October last, had asked the Shrine Board to allow only those pilgrims who have valid and verifiable RT-PCR/RAT test not older than 72 hours of their arrival at Katra. Though it had not mentioned anything about daily number of pilgrims, it had earlier put a cap on 25,000 pilgrims proceeding to the shrine in a day.

However, no one en route, from Katra to the holy shrine, checked the COVID test reports or the yatra slips with the pilgrims, said Parveen Kumar from Uttar Pradesh who had come for darshan at the shrine along with parents for the first time. He was looking for his parents who had been missing after the stampede.

As the number of pilgrims visiting the holy shrine on new year day used to be cross 25,000 mark earlier also, officials seemed to have taken the huge rush gathered in shrine area casually. Except for routine frisking and X-ray scanning of their belongings to check them from carrying any weapon and inflammable among other prohibited items, no one bothered to find out whether all those proceeding to the shrine had with them the mandatory yatra slip and COVID test reports, said almost all the pilgrims who survived the stampede and reached Katra town.

Jammu : In view of the spike in the number of Covid cases in #SMVDU, Closure of the University campus has been ordered. All precautions to be ensured by all concerned. DC REASI