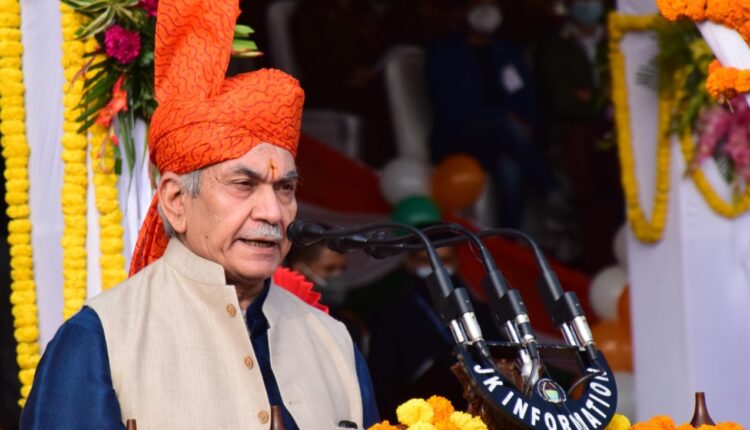 JAMMU, Jan 26: Jammu and Kashmir Lieutenant Governor Manoj Sinha on Wednesday slammed those inciting the people by spreading ”rumours” about “imaginary issues” like demographic changes in the union territory and said land reservation has been done on the pattern of mountainous states.
Addressing the Republic Day function in Jammu, the Lt Governor said that peace in Jammu and Kashmir is a prerequisite for a vibrant tourism sector, which of late has set new employment and revenue generation records, and urged all to take the pledge of eradicating terrorism and terror ecosystem perpetuated by the neighbouring country.

“Some people are inciting public by spreading rumours about demographic changes in Jammu and Kashmir,” he said.
“There is a section in the society which has always been misleading the people about imaginary issues like demographic change, and on this pretext, the most hardworking and needy class of people had been alienated in their own land and were deprived of using it as per their wishes or requirements,” Sinha said.

The Lt Governor said that the government is committed to building a strong Jammu and Kashmir and we will continue to march ahead with Mantra of “4 P’s — Peace, Progress, Prosperity and People first”.
“We are determined to ensure every single citizen of UT enjoys a prosperous and peaceful life,” he said.
Braving inclement weather, contingents of police and paramilitary forces on Wednesday took part in the 73rd Republic Day celebrations here, officials said.

The Lieutenant Governor presided over the Republic Day function which was held at MA Stadium amid tight security arrangements in view of terror threats.
Sinha asserted that land reservation has been done in the Union territory on the pattern of the mountainous states.
“I assure the land owners and farmers that all these changes have been effected with the sole aim of empowering them,” he said.
Several parties in J-K, including the NC and PDP, have been raising these issues.

The Lt Governor paid homage to those who sacrificed their lives for the country.
“I pay tribute to the jawans and officers of Jammu and Kashmir Police, Army and other Central Security Forces, who continue to make supreme sacrifice for unity and integrity of the motherland.

“While saluting their valor and sacrifices, we should also take a pledge to eradicate terrorism and terror ecosystem perpetuated by the neighboring country,” said the Lt Governor.
The Lt Governor reiterated the administration’s commitment to promoting local businesses in the real estate sector.
He observed that the “central government under the strong and able leadership of Prime Minister Narendra Modi took the bold and decisive step of breaking the shackles erected in the path of development of Jammu and Kashmir.

“After the historic transformative changes in August 2019, Jammu and Kashmir is poised to become the latest success story among Indian states and a model of Socio-Economic development for the country.”
The Lt Governor highlighted the co-existence of various religions enriching and diversifying Jammu and Kashmir’s cultural heritage and making the UT an example of immortal organic composite Indian culture. (Agencies)

On the occasion of Republic Day celebration, unveiled Charkha (Spinning Wheel) installed by J&K KVIB at International Airport, Srinagar. Charkha which symbolizes Self-Reliance is a befitting tribute to Bapu and to all the great freedom fighters: LG Manoj Sinha