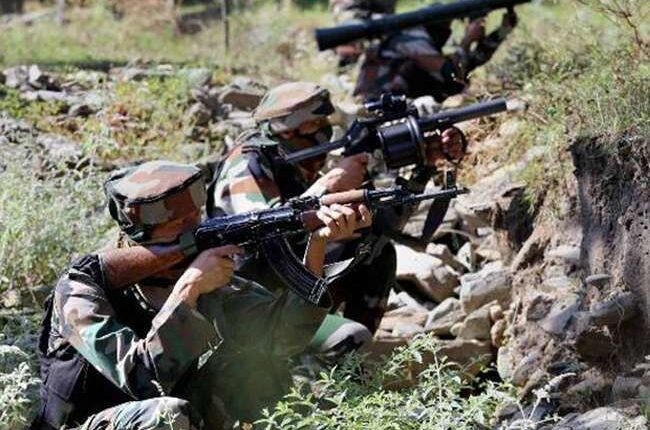 Both the militants killed by troops were carrying armour piercing bullets

RAJOURI, AUGUST 11: Four Army men including a Junior Commissioned Officer were killed and two others injured during wee hours of Thursday when two heavily armed militants attacked an army post in Rajouri district ahead of the Indepence Day celebrations in Jammu and Kashmir.

Both the militants who attacked the army post were also killed. Their identity was yet to be ascertained.

The deceased soldiers have been identified as Subedar Rajendra Prasad of Maligoven in Jhunjhunu district of Rajasthan, besides Riflemen Lakshmanan D of T Pudupatti Thummakundu in Tamil Nadu, Manoj Kumar of Shahjahanpur Faridabad and Rifleman Nishant Malik of Adarsh Nagar Hisar (both Haryana).

Paharis too will get reservation with Gujjars and Bakerwals;…

“The sentries challenged the two (militants) who threw grenade while attempting to gain entry inside the post,” the spokesman said, adding, “However alert troops cordoned the area and engaged them in a fire fight thereby pinning them.”

In the ensuing encounter, he said, four soldiers were killed and two others were injured. “Six soldiers of Indian Army were injured in the operation out of which, four succumbed to their injuries while repulsing this suicide attack,” he added.

Later, security forces seized from the slain militants two AK 47 rifles along with nine magazines and 300 rounds, five hand grenades and other “administrative stores’’. A number of seized AK bullets being colour coded were armour piercing and incendiary ammunition.

Sources said that the police and security forces were already looking for militants since Tuesday afternoon when some locals reportedly informed them about the sighting of two suspects in Darhal market.

“Strongly condemn despicable (militant) attack in Rajouri; tributes to brave soldiers who made supreme sacrifice. Heartfelt condolences to the families of the bravehearts martyred in the attack,” Lt Governor Manoj Sinha said in a tweet as per GNS, adding, “We shall deal with evil designs of (militants) and their backers in a befitting manner.”

National Conference president and former Chief Minister Omar Abdullah also condemned the attack.  “Very sorry to hear about the death in the line of duty of three soldiers following a militant attack in Rajouri. While condemning the attack I send my condolences to the families & my prayers for the swift recovery of those officers & jawans injured in the attack #Rajouri,” Omar tweeted.

J&K | Rifleman Nishant Malik who was injured while bravely fighting and eliminating 2 terrorists in Paragal, Rajouri has succumbed to injuries: White Knight Corps

Paharis too will get reservation with Gujjars and Bakerwals; says Amit Shah