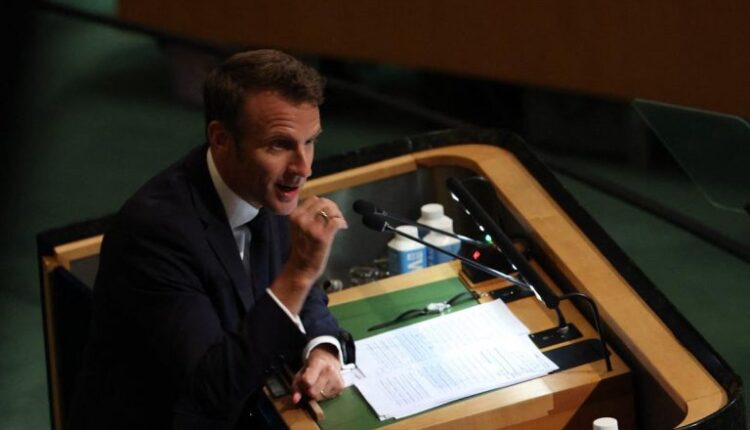 United Nations , Sept 21: United Nations French President Emmanuel Macron told world leaders at the UN General Assembly session that Prime Minister Narendra Modi was right when he told Russian President Vladimir Putin that this is not the time for war.
Mr. Modi, who met Mr. Putin last week on the sidelines of the 22nd meeting of the Shanghai Cooperation Organization in Uzbekistan’s Samarkand, had told the Russian leader that “today’s era is not of war”.

“Narendra Modi, the prime minister of India was right when he said the time is not for war. It is not for revenge against the West or for opposing the West against the East. It is the collective time for our sovereign equal states to cope together with challenges we face,” Mr. Macron said during his address at the General Debate of the 77th Session of the UN General Assembly on Tuesday.
“This is why there’s an urgent need to develop a new contract between the north and the south – an effective contract which is respectful for food, for biodiversity, for education. It’s no longer time for block thinking but to build a coalition of specific action to reconcile legitimate interests and common goods,” he said.

In Samarkand, Mr. Putin had told Mr. Modi that he knows his “position on the conflict in Ukraine and the concerns that you constantly express”.

“We will do our best to make it stop as soon as possible. However, unfortunately, the opposing side, the leadership of Ukraine, announced that it was abandoning the negotiation process and declared that it wants to achieve its goals by military means, ‘on the battlefield’, as they say. Nevertheless, we will always keep you informed of what is happening there,” Mr. Putin had said.
Reform of the UN Security Council
At the UNGA session on Tuesday, Mr. Macron expressed hope the international community can commit to the reform of the UN Security Council “so that it is more representative, welcome new permanent members and remain able to play its full role by restricting the use of veto in cases of mass crimes”.
In his address on the opening day of the General Debate, the French president said “there are countries that have chosen a form of neutrality vis-à-vis this war. Those who are saying that they’re non-aligned are wrong. They are making a historic error”.
“The combat of the non-aligned movement is a fight for peace. They fought for peace, the sovereignty of states and territorial integrity. Those who are keeping silent today are in a way complicit with a cause of new imperialism, a new order that is trampling over the current order, and there’s no peace possible here.”
“Russia is today seeking to uphold a double standard but the war in Ukraine must not be a conflict that leaves anyone indifferent,” Mr. Macron said. (Agencies)