Indonesia | At least 127 people died after violence at a football match in Indonesia, last night. The deaths occurred when angry fans invaded a football pitch after a match in East Java 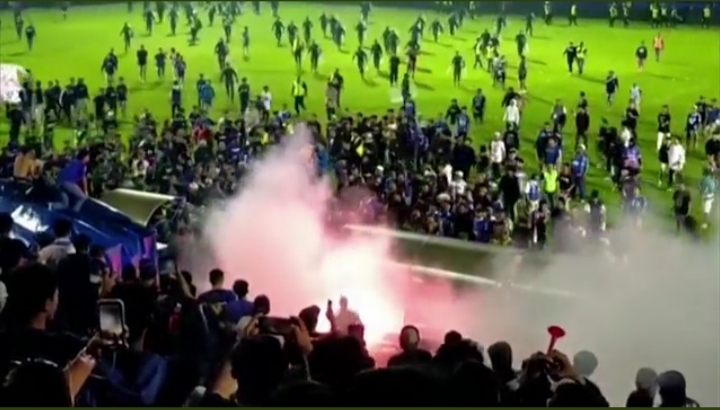 JAKARTA, OCTOBER 02: Indonesian police said on Sunday that at least 129 people had died and 180 were injured after a stampede following crowd trouble at a football match in the province of East Java overnight.
After the match between Arema FC and Persebaya Surabaya had ended, supporters from the losing team had invaded the pitch and police had fired tear gas, triggering a stampede and cases of suffocation, East Java police chief Nico Afinta told reporters.
Indonesia’s chief security minister Mahfud MD said that the number of spectators exceeded the capacity of a stadium. In an Instagram post, he said 42,000 tickets had been issued for a stadium that had a capacity to hold 38,000 people.
Video footage from local news channels showed people rushing onto the pitch in the stadium in Malang and images of body bags.
Indonesia’s sports minister Zainudin Amali said authorities would re-evaluate safety at football matches and consider not allowing spectators.
The Indonesian top league BRI Liga 1 has suspended games for a week following the match that Persebaya won 3-2 and an investigation had been launched, the Football Association of Indonesia (PSSI) said.
There have been previous outbreaks of trouble at matches in Indonesia, with a strong rivalry between clubs sometimes leading to violence among supporters. (Agencies)

Indonesia | At least 46 killed,700 injured in an earthquake that rattled…