PDP president Mehbooba Mufti urges youths to participate in elections in J&K, says it’s their “weapon” to fight for their rights and they should not cede space to BJP 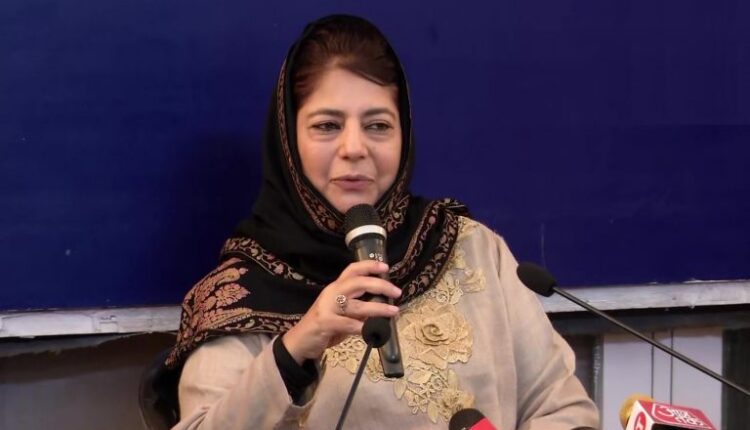 SRINAGAR, Nov 27: PDP president Mehbooba Mufti on Sunday urged the youths to participate in future civic and assembly elections in Jammu and Kashmir, saying it is their ”weapon” to fight for their rights and they should not cede space to the BJP.
“It is not BJP’s India and, note it down, we will not let it become BJP’s India,” Mufti said at a party function here.
The former J-K Chief Minister also warned the Centre not to behave “like those raiders from Pakistan who came to the valley in 1947″ and were forced to flee by Kashmiris.
“India is not BJP. The India which we joined is Jawaharlal Nehru’s India, (M K) Gandhi ji’s India, Maulana Abul Kalam Azad’s India, it is the India of Rahul Gandhi who is travelling the country for Hindu-Muslim unity, it is Tushar Gandhi’s India,” Mufti said.

She again lashed out at the BJP for the scrapping of Article 370 in 2019.
“We have formed a bond of heart with this country, the constitutional bond, the bond of love, but what did you do? You played with our dignity, our identity. You destroyed the whole state. This will not work,” she added.
Mufti asked the youth not to cede space to the BJP.

“If panchayat elections or municipal elections take place, I want to tell the youth especially not to cede space to them,” she said.
Mufti said local bodies or assembly was a power in the hands of the youth and they should not leave it to someone else.
“If you want to fight, this is your small as well as big weapon. Panchayats, local bodies or assembly are the weapons in your hands, power in your hands and you should not leave it for someone else,” she said.
The PDP chief vowed to continue the struggle for the restoration of J-K’s special status, saying everything taken from the people of J-K will be brought back “along with interest”. (Agencies)