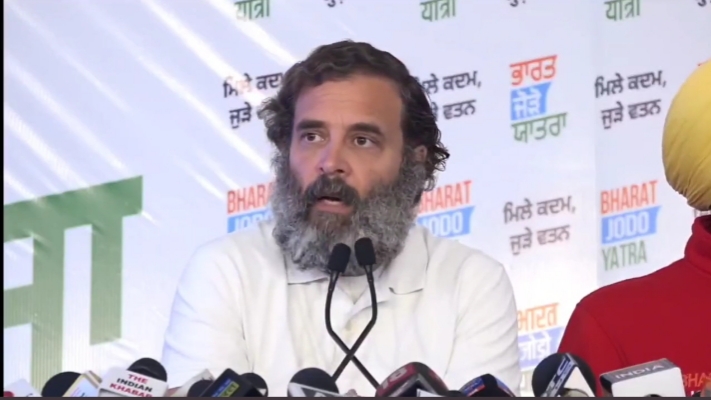 Hoshiarpur, Jan 17: Congress leader Rahul Gandhi on Tuesday accused the BJP and the RSS of capturing all institutions in the country, and claimed there is “pressure” on the media, Election Commission and the judiciary.
He also took a swipe at the Aam Aadmi Party government in Punjab and asserted that Punjab should be run from Punjab only, not from Delhi.
Addressing the media here, Gandhi charged that the BJP and RSS have captured all the institutions in the country.
“Today all the institutions of the country are controlled by the RSS and the BJP. There is a pressure on all institutions. Press is under pressure, bureaucracy is under pressure, the Election Commission is under pressure, they put pressure on the judiciary,” he charged.
“This is not a fight between one political party and another political party. It is now a fight between the institutions of the country, which were captured by them, and the opposition,” he said.
Normal democratic processes in the country is now missing, he claimed.
Replying to a question on Bhagwant Mann, Gandhi said he had told the Punjab chief minister that Punjab can be run from Punjab only.
“It is a historical fact. If it is run from Delhi, then people of Punjab will not accept it,” Gandhi, whose Bharat Jodo Yatra is passing through the state, said.
Gandhi on Monday had told Mann that he should not become a remote control of anyone and should run the state independently.
Reacting sharply, Mann had said he was made the chief minister by the public and reminded Gandhi of the “insult” inflicted on Amarinder Singh by the Congress by unceremoniously removing him from the post. (Agencies)

The tenure of JP Nadda as national president of the Bharatiya Janata Party has been extended till June 2024: Union Home Minister Amit Shah

SRINAGAR (J&K) | DGP Dilbag Singh today chaired a meeting of senior officers of Kashmir Zone to review the crime and security scenario of the Valley. He also reviewed security arrangements for the upcoming Republic Day events.