No need of proof from Army, have full faith in them; Rahul Gandhi on Digvijay’s remarks on surgical strikes 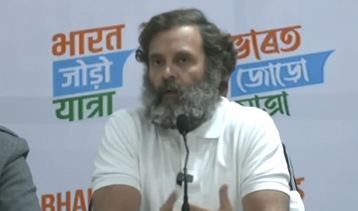 JHAJJAR KOTLI, JANUARY 24: Congress leader Rahul Gandhi on Tuesday said that the party has full faith in the India Army and it does not need to provide evidence for any action done by it.

“We have full faith in our Army and if it has done some action, it does not need to provide evidence of it,” he told media persons in reply to a question here.

“What Digvijay Singh said I do not agree with it,” he said, adding that even the Congress party’s stand is that it is Digvijay Singh’s personal view point and it has nothing to do with it.

When asked as to why no action has been taken against Digvijay Singh for repeatedly taking a contrary stand to the Congress’ official line, Rahul Gandhi said that “we are a Democratic Party and not a dictatorship”.

“We are crystal clear that our army do a job..they do a job exceptionally well and they do not need to provide proof for anything, the Congress leader said

“It is in the culture of our party to allow conversation and sometime when those conversations happen, the people who have extreme views express it. We try to manage a conversation,”he said.

However, in the BJP-RSS, there is no conversation. They just decide what is going to be and nobody can talk after that.

Leaving red faces in the Congress, and setting off a political storm with Rahul Gandhi’s Bharat Jodo Yatra in Jammu, Congress leader Digvijaya Singh Monday questioned the surgical strikes conducted in 2016 on terror camps across the LoC in Pakistan, saying “no proof” was provided.

He also raised questions about the 2019 terror attack in Pulwama, saying the Government was yet to present a report in Parliament on “why 40 CRPF personnel had got martyred’’.

Singh’s remarks had drawn a swift backlash from the BJP, which said the Congress was “blinded by hate” for Prime Minister Narendra Modi and had “insulted” the country’s armed forces. The Congress distanced itself from Singh’s comments, saying they were “his own and do not reflect the position” of the party.

Raising the Pulwama attack while addressing a public meeting during the Bharat Jodo Yatra in Jammu’s Satwari area, Digvijaya said, “40 CRPF jawans were killed… why were they killed… The CRPF D-G had also said that they should be airlifted because Pulwama is a sensitive zone. Modi did not allow that.”

He said, “Pulwama is a sensitive zone where every vehicle is inspected. One vehicle comes from the opposite direction and rams the CRPF vehicle. How did this happen? How did this mistake happen? No report on this has been presented in Parliament.”

Singh’s remarks had drawn a swift backlash from the BJP, which said the Congress was “blinded by hate” for Prime Minister Narendra Modi and had “insulted” the country’s armed forces. The Congress distanced itself from Singh’s comments, saying they were “his own and do not reflect the position” of the party.