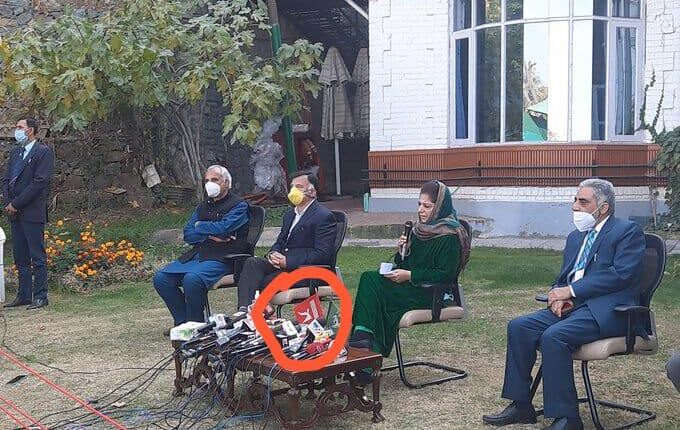 Srinagar, October 23: Sending a message that prolonged detention under PSA has not dampened her spirit to fight for getting back the erstwhile statehood to Jammu and Kashmir and its special status, PDP president and former chief minister Mehbooba Mufti on Friday displayed the erstwhile State flag along with her party flag during her maiden press conference after her recent release by the government in Srinagar.Both the flags were displayed in front of her all the time she addressed media persons at her Gupkar residence. By doing so, party insiders say that she wanted to send a message that she was serious in fighting for restoration of Article 370 and 35-A. In this context, she while pointing towards the erstwhile State Flag also said that “we will not raise any flag till the time our State flag is given back to us.”Mehbooba Mufti was arrested on the intervening night of August 4-5, 2019, before government at the Centre moved to abrogate Article 370 and bifurcate the then State of Jammu and Kashmir into two Union Territories.

Procurement of apple to be done by NAFED through SDAs: Director Horticulture