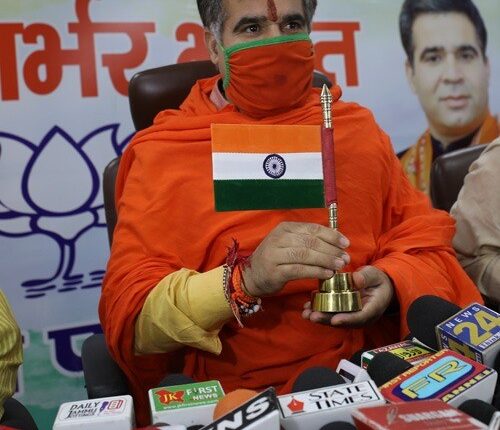 Accession Day to be celebrated with great fanfare on October 26

BJP president Ravinder Raina here on Saturday described the outbursts of former chief minister and PDP president Mehbooba Mufti as “act of frustration’’, saying that she wants to indulge in “competitive politics of secessionism’’ by making such misplaced, misdirected and out-of sync statements.

Talking to media persons here, he made clear that Article 370 will never be restored till the “Doom’s Day’’ and “the shrewd gang’’ should “stop inciting’’ common masses as the talks about taking back state flag and state constitution is nothing but “day dreaming’’. He said that while the law will take its course into the utterances of Mehbooba Mufti, it looks looks that “an unsuccessful chief minister and a failed PDP president is giving vent to her frustration and immature thinking’’.

Mehbooba Mufti in her maiden press conference after her release from over an yearlong detention had said on Friday that she will not raise tricolor until the Jammu and Kashmir got back its own flag. Following the abrogation of Article 370 on August 5, 2019 and bifurcation of Jammu and Kashmir into two separate Union Territories, the erstwhile state had lost its own separate flag and the constitution.

The BJP leader described Article 370 as “Article of Deception and Deceit’’, adding that this provision has finally been buried by Parliament and if anybody wants to question its collective wisdom then one has either lost one’s mental equilibrium, or one’s understanding of the affairs and constitutional scheme of things is very poor.

Lashing out at “Gupkar Gang’’, Raina said that Jammu and Kashmir was not the personal property of any leader, but it belonged to 135 crore Indians including the residents of the Union Territory.

He said that BJP will celebrate Accessions Day on October 26 with fanfare as “Jashn-e-Azadi’’ as it was on this day in 1947 the then Dogra ruler Maharaja Hari Singh had signed the Instrument of Accession and acceded the erstwhile state into the Indian Dominion. Pointing out that Tiranga yatras will be taken out all over the UT, he appealed people to hoist tri colour on the roof top of their houses on that day.