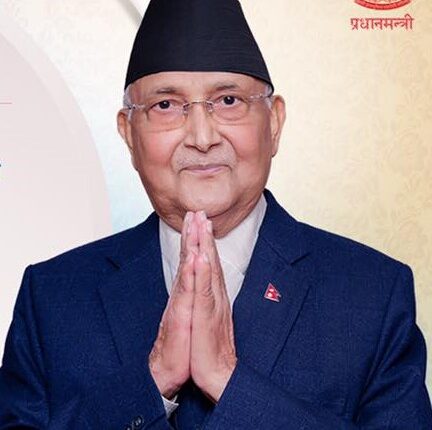 New Delhi, October 24: Indicating a softer line, Nepal Prime Minister K P Sharma Oli used an old map of Nepal on Friday to greet all on the occasion of Vijaya Dashami festival.
The triangular piece of land, Kalapani-Linpulekh-Limpiyadhura which was shown as part of Nepal’s territory in the new map unveiled on May 20 last and made part of the insignia of the Himalyan State through an amendment on June 13, did not figure in the old map carried on national insignia of Nepal used by PM Oli on Friday.
The use of old map by PM Oli at country’s main festival came as a surprise to political leaders of Kathmandu who said that he can use any map of Nepal at his individual level, but as PM of Nepal he should have used the national map that was passed by country’s Parliament.
Prime Minister Oli’s use of the national insignia of Nepal carrying the old map has drawn strong reactions from the political class of Kathmandu, with leaders expressing surprise about the use of the old map during Dasara, which is the biggest festival in the Himalayan country.
Use of the old map also drew sharp reactions on social media, with Nepalese users connecting the move with Thursday’s discussion between Oli and Samant Kumar Goel, chief of the Research and Analysis Wing (R&AW), the external intelligence wing of India.
A Nepalese publication reported that Goel led a nine-member delegation. The visit drew attention as it came a fortnight before the scheduled visit to Nepal of General Manoj Mukund Naravane, chief of the Indian Army, who will be conferred. General Naravane is likely to be conferred the honorary rank of General of the Nepali Army in an investiture ceremony.