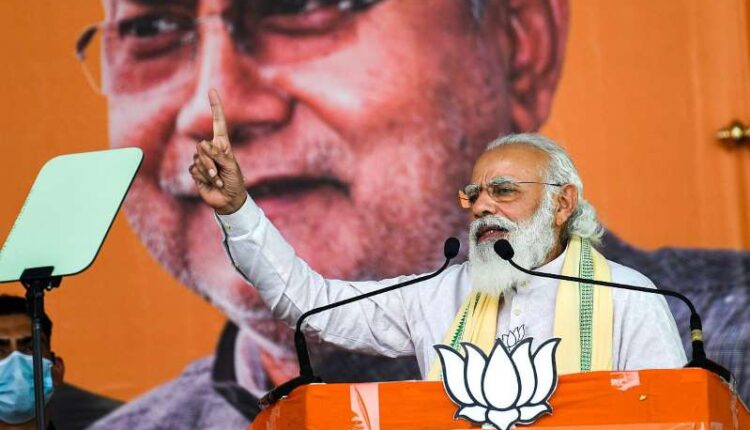 New Delhi, October 28: Sharing stage with Chief Minister Nitish Kumar, Prime Minister Narendra Modi on Wednesday invoked Ayodhya in Bihar while launching a scathing attack on opposition and urging people to defeat the opposition which had ushered in a “jungle raj” in the state and embezzled funds meant for development schemes.
Invoking the imagery of Goddess Sita and her father Janak, the king of Mithila of which this north Bihar town became the capital later on, Modi said those who used to taunt the Bharatiya Janata Party over the delay in construction of Ram temple were now forced to applause. “I am happy to be here, in the birth place of Mother Sita. Construction of temple at Ayodhya has also begun. Those siyasi log (political opponents) who used to taunt us with the question what is the date (for commencement of construction), have now been forced to clap in applause,” Modi told a rally in Darbhanga.

The prime minister lavished praise on Chief Minister Nitish Kumar, lavished praise on the latter, calling him the ‘bhaavi mukhyamantri‘ (prospective CM) and crediting him with Bihar’s economic turnaround. “The people of Bihar have made up their mind to inflict yet another defeat on those responsible for the ‘jungle raj’ where crime graph had soared to an extent that living a normal life became difficult for the common people, our mothers and sisters,” Modi said in an obvious attack on the Rashtriya Janata Dal-Congress combine, without mentioning either by name.

“These are not the times to do ‘hawa hawai baten’. Consider what would happen if those who promote ‘jungle raj’ come to rule Bihar amid this pandemic, it will be a ‘dohri maar’ double whammy, on people of Bihar,” the Prime Minister said. “What can people of Bihar expect from ‘jungle raj ke Yuvraj’….people here know these people well,” he said attacking NDA’s main challenger Tejashwi Yadav without naming him. “They committed financial irregularities in the name of waiving farm loans. They took bribes to give jobs. The NDA (National Democratic Alliance) stands for development. Beware of those who are greedily eyeing the funds earmarked for progress,” said Modi. He said those who were in power before the NDA government was formed were so obsessed with their ‘commission’ that they never cared about connectivity for regions like Mithila. A project like Kosi Mahasetu could be completed only when the NDA was in power both in the state and the Centre, he added.

The prime minister, who spoke at length about the measures taken by the Centre for the development of Mithila as well as those proposed for the future, sought to strike a chord with the local populace by recalling legendary Maithili poet Vidyapati and uttering phrases in the local language.

He also made references to ‘paan‘ (betel leaves) and ‘makhaan‘ (fox nut) cultivated in the area in abundance.

In an attempt at reaching out to the lower castes, Modi also paid tributes to Dalit icon Baba Chauharmal.

Noting that voting was underway in several assembly segments in the first phase of elections, Modi urged the people to stay safe and take precautions in view of the COVID-19 pandemic while exercising their franchise.