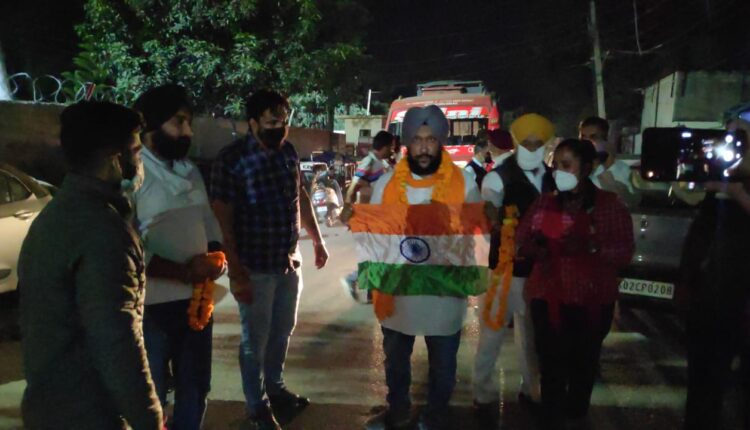 Jammu, November 3: Social activist Amandeep Singh Bhoparai, who was arrested by police on Tuesday – nine days after hoisting tri colour at the office of PDP here, was let off by police late in the evening.

He was released on furnishing a bail bond of Rs 20,000, said a police officer, adding that he was arrested for violating the COVID-19 guidelines.

Sources, however, said that release followed growing public criticism of police action, with no one buying the police version of having arrested him for violation of COVID-19 lockdown restrictions imposed by District Magistrate and not for hoisting tri colour.

In response to PDP president Mehbooba Mufti’s statement that she will not raise tri colour until Jammu and Kashmir was resorted its own flag, Bhoparai had on October 24 hoisted tri colour at PDP headquarters in Gandhi Nagar here. Next day, he came to the PDP office again along with his supporters, but this time police foiled his attempt to hoist tri colour there.

He was arrested by police under sections 188 and 269 of the Indian Penal Code for violating the District Magistrate’s order imposing restrictions on holding rallies and demonstrations under provisions of Epidemic Diseases Act, 1897 and the Disaster Management Act, 2005.

While Section 188 of IPC relates to disobedience to order duly promulgated by public servant asking general public to abstain from a certain act, Section 269 is negligent act likely to spread infection of disease danger­ous to life.

Meanwhile, talking to a local news portal, Bhoparai’s father said that his son being an ex-navy man will continue to hoist tri colour. “I too am an ex-serviceman…we have sworn by the Indian flag and we will hoist tri colour at any cost,” he added.