I am 85, but will not sleep until restoration of Art 370; says Farooq on arrival in Jammu 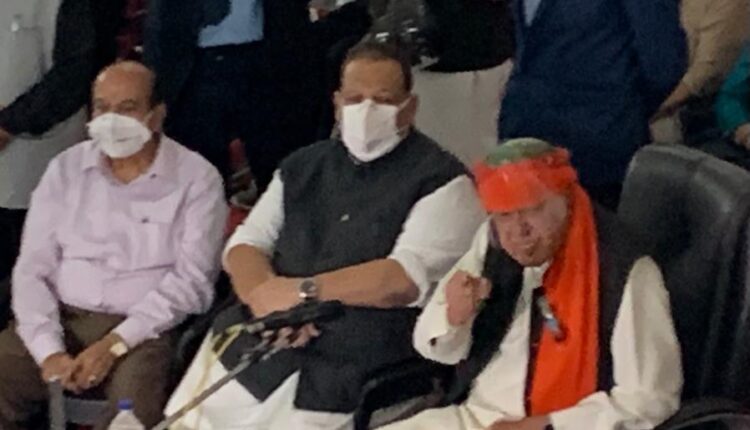 Jammu, November 6: National Conference president and former Jammu and Kashmir Chief Minister Farooq Abdullah here on Friday dared BJP and other likeminded organisations to speak in front of him that he was a Pakistani or Chinese, saying that he will not rest until he gets back people the rights which have been snatched from them.

“I am 85, but I am still young. I will not sleep until I get back people their rights and once this happens, I will go,’’ Farooq told a massive gathering party workers at Sher-i-Kashmir Bhawan here amidst slogans “Sher Aa Gaya…Sher Aa Gaya’’ (Lion has come…Lion has come). “I do not pelt stones, but we will fight for our identity,’’ he said, adding “we have fought, will fight and we will win also’’.

Supporting a saffron cloth around his head, the NC leader said “They now call me a Pakistani…a Chinese’’. “Where were you when Farooq Abdullah was speaking at Geneva,’’ he asked, pointing out that Atal Behari Vajpayee was also with him at that time.

The NC leader criticised BJP of making its party agenda as country’s agenda. Many people have come and gone, he said, adding “Trump (US president Donald Trump) is going, you will also go’’. “You are Pakistanis as you have been lifting them up,’’ he accused BJP without naming the saffron organisation.

He asked party workers not to be misled by the lies being spread by BJP leaders, saying that “they said Pakistanis will come. Now tell me who came’’, he asked. In apparent reference to the initiation of of political process in militancy infested Kashmir during mid 1990s, said “even when I was abroad, people started looking for  me to save Jammu and Kashmir as they knew that National Conference can save it’’. “No one was searching for BJP,’’ he added.

NC vice president Omar Abdullah accused BJP of taking away the safeguards available to the people of Jammu also in respect to jobs and land, as as to “take the revenge from them not helping them win 45 seats in 2014 assembly elections,’’ he added.

“Today our land, jobs and even scholarships are not secure,’’ he said, adding Haryana has secured 75 per cent of the jobs for locals. “However, when we ask for the same, we are called anti-nationals,’’ he said, adding “You won’t let us buy land in Himachal, have jobs in Haryana, but similar laws in J&K hurt you’’. He ridiculed BJP of criticising them for taking about Article 370 and 35-A, adding that these were provisions of the Indian Constitution and not of Pakistan’s.

NC leaders meeting party workers a day ahead of their scheduled meeting with leaders of People’s Alliance for Gupkar Declaration assumes significance as it was held in old Jammu city, the main Hindu heartland considered a BJP bastion. Earlier, both the leaders on their arrival were given rousing reception by party workers at the airport.

The meeting sent a loud and clear message that even in Jammu region especially in Hindu heartland, there were many opposed to abrogation of Article 370 and bifurcation of the erstwhile state into two Union Territories of Jammu Kashmir and Ladakh. While people in Kashmir are already seeking restoration of Article 370, people in Ladakh are asking for constitutional safeguards in respect to land and jobs.