Border areas of Eastern Ladakh get 4G connectivity with the world 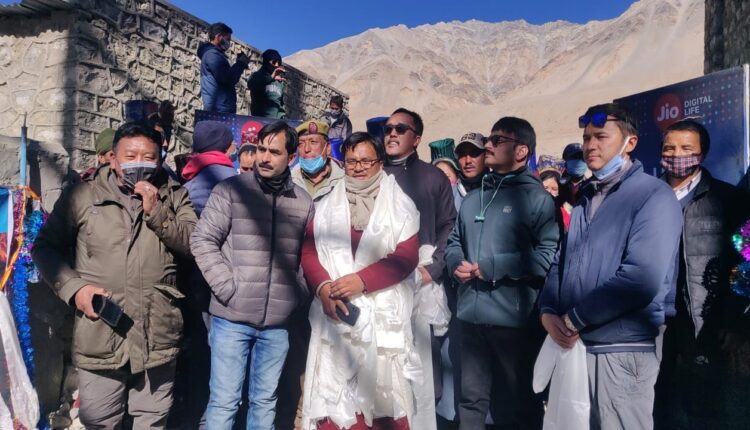 Leh, November 8: In a major boost to digital connectivity in areas of Eastern Ladakh along the Line of Actual Control where Indian and Chinese troops are in stand off position for past six months, Changthang area on Sunday got 4G mobile connectivity with rest of the world.

This followed the setting up of the first mobile tower by Jio in Tangste area which was inaugurated by Tashi Namgyal Takzee, Executive Councilor for Animal and Sheep Husbandry in Leh district’s Ladakh Autonomous Hill Development Council.

After dedicating the first ever mobile tower to people in the region, Tashi made the first 4G video call to Hill Council’s Chairman-cum-Chief Executive Councilor Advocae Tashi Gyalson and BJP MP from Ladakh, Jamyan Tsering Namgyal.

Congratulating people of Tangtse for getting 4G connectivity, he expressed gratitude to Jio officials for setting up the mobile tower, adding that apart from improving connectivity with the world, it will also prove beneficial for everybody in this remote region especially students who suffered a lot due to non-availability of internet facility for online studies in Durbuk area following lockdown in view of COVID-19 pandemic situation.

Both Indian and Chinese troops are in standoff position along the LAC in the area since May 6 and the situation getting further escalated following a clash between them in mid June. Twenty Indian soldiers including a Colonel died in the clash. The casualties on Chinese side were stated to be much higher.

Since then, there has been breakthrough in the situation despite 8th round of talks at the level of Corps Commander of both the countries in Chushul on Friday last. However, both sides agreed to exercise restraint and avoid misunderstanding and miscalculation at LAC.

Sources said  that India has maintained that Chinese troops should first completely disengage from all flash points and return to their April 2020 position at the LAC.

Both sides have so far deployed sizeable number of troops, besides tanks, artillery, missiles, fighter jets and air defence system along the LAC in Eastern Ladakh. With standoff likely to take a long haul, they have also started making arrangements for keeping the troops during winter months also in areas where temperature dips to minus 30 degree and beyond.

India has so far provided initial consignment of  winter gear from US to its troops to enable them stay on icy heights during extreme cold weather.

Weapons smuggled by Lashkar from PoK seized in Poonch