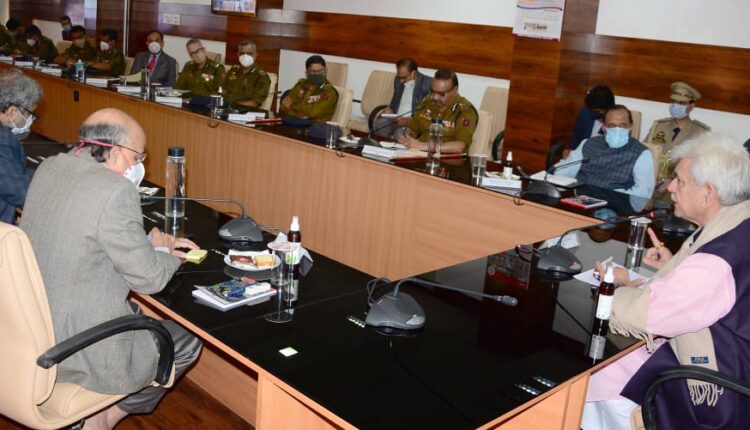 Jammu, November 10: Jammu and Kashmir Lieutenant Governor, Manoj Sinha on Tuesday emphasised the police and other security agencies on providing “sufficient security’’ to candidates participating in the coming District Development Council elections, as also the byelections for urban and rural local bodies in the Union Territory.

Asking them to ensure maximum participation of people in the upcoming electoral exercise, Sinha while reviewing security arrangements at the Armed Police headquarters here said “people must be facilitated during these elections so that they would feel secured to cast their ballot on the particular Election Day”. During his maiden visit to the Armed Police headquarters, he stressed upon the officers to ensure free, fair, transparent and peaceful elections, besides having a cohesive and strong liaison between different security agencies for effective actions on the ground.

The LG expressed confidence that Jammu and Kashmir Police is “capable of dealing with emerging situation while maintaining a close watch on all inimical elements to ensure peace in the region’’.

While Advisor to Lt Governor R R Bhatnagar, Chief Secretary BVR Subrahmanyam, Secretary Home Shakeen Kabra, Director General of Police Dilbagh Singh, ADGPS and IG Jammu were present at the meeting, IG Kashmir, DIGs, SSPs and other senior police officers from there attended it via video conferencing.At the outset, IG Kashir and district SSPs in the Valley briefed the LG about security arrangements and other preparatory measures for the ensuing elections in their respective districts.