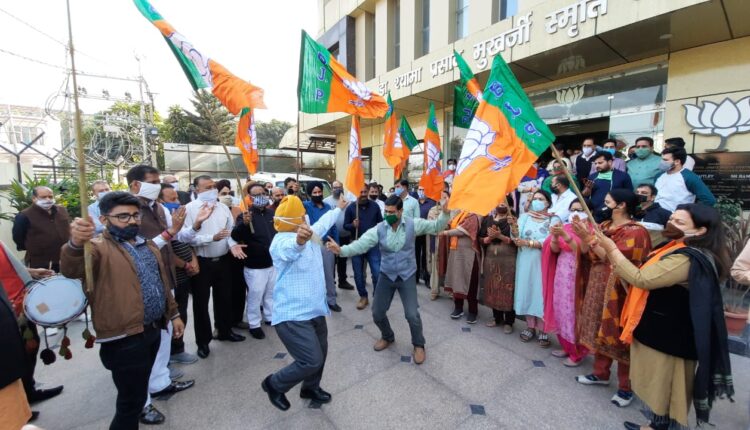 Jammu, November 11: Bharatiya Janata Party here on Wednesday celebrated party’s victory in Bihar assembly elections in a spectacular way at their party headquarter in Trikuta Nagar, Jammu, with triumphant leaders and activists dancing on the beats of traditional Drums, distributed sweets among themselves and the visitors as well as passersby and fired crackers on the occasion to show their delight.

Ravinder Raina, while speaking on the occasion termed the Bihar win as the win of party’s policies. He said that the masses have given a strong message that their belief in the policies of Narendra Modi led government is unshakable and the whole united opposition shall fail in their baseless false agenda unleashed to gain the power corridor.

Raina said that after Ladakh, Bihar has repeated BJP with imposing faith in development and faith in the Nationalist character of the party. He said that gone are the days when Congress and other parties used to befool the gullible masses to gain the votes, now in the modern era flooded with bombardment of knowledge, everybody can seek facts and this has resulted in the single sided victories of BJP everywhere.

Raina said that the momentum of win will be continued in the elections of Bengal and DDC elections in the J&K as well. He said that BJP’s politics is not meant for the gain of power corridor but to the serve the people efficiently and this fact is very well taken by the masses.