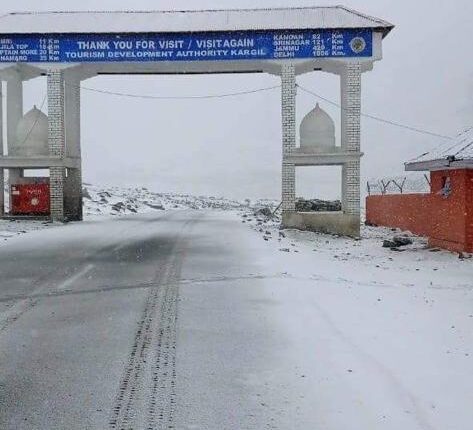 Jammu, November 15: Mercury dipped and the vehicular traffic between Jammu-Srinagar and Srinagar-Leh suspended on Sunday following snowfall on higher reaches and rains in the plains of Jammu

Many areas in the higher reaches of Jammu and Kashmir, including Mughal road, famous ski-resort of Gulmarg, and the tourist resort of Sonamarg received snowfall which was going on when last reports came in, the officials said. They said there were reports of snowfall from other areas in the higher reaches, including Gurez in north Kashmir’s Bandipora district, besides in Zojila Pass and Drass in Ladakh.

Due to snowfall, authorities closed the Srinagar-Leh road, which passes through Zojila pass and connects Jammu and Kashmir with Ladakh. The Mughal road connecting Poonch with Shopian in Kashmir too was closed.

“The roads have Polp been closed for traffic as a precautionary measure in the wake of snowfall,” the officials said.

Meanwhile, most of the areas in the plains of the Kashmir valley received rains, bringing down the temperature.

The MET Office has said there will be an increase in precipitation during the next two days with the peak around Saturday night and Sunday.

The weather is likely to improve significantly thereafter, it said.

Last Day Darshan at Kedarnath in 2020