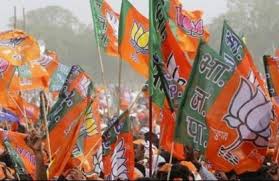 Jammu, November 16: Former minister Sham Lal Choudhary and two ex-MLAs – Prof Garu Ram Bhagat and Shakti Raj Parihar were among 33 candidates whose names were cleared by BJP in its third list of candidates for the 6th, 7th and 8th phases of District Development Council elections in Jammu and Kashmir.

While party’s former minister Sham Lal Choudhary will be contesting from Suchetgarh, its former MLA Prof Garu Bhagat has been fielded ion R S Pura. The party former MLA from Doda, Shakti Raj Parihar, who in its second list was fielded from Gundana, has been given ticket from Marmat also.

Fourteen of the candidates are females, according to list of candidates released by party general secretary Dr Devinder Kumar Manyal here. The DDC elections in Jammu and Kashmir are being held in eight phases beginning November 28.

The third list of all the 33 candidates is as below: