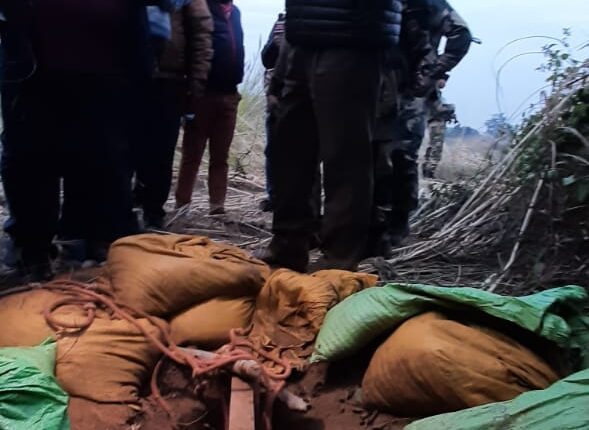 Jammu, November 22: In a major breakthrough, BSF along with Jammu and Kashmir Police on Sunday detected an underground cross border tunnel in Jammu and Kashmir’s Regal area of Samba district, which was used by four Jaish-e-Mohammad militants to enter the Union Territory from Pakistan side during wee hours of Thursday last.

“The tunnel is 15-20 ft deep and nearly 150 mts long…It originates from inside Pakistan and opens…It has been used by four Jaish-e-Mohammad militants who were recently killed by police at Ban’’ Toll Plaza along the Jammu-Srinagar national highway near Nagrota, said Director General of Jammu and Kashmir Police Dilbagh Singh who along with Inspector General of BSF, Jammu Frontiers, N S Jamwal and other senior BSF and police officers visited the spot.

Four militants after sneaking into Samba district through the tunnel during wee hours of Thursday had boarded a truck to Kashmir. A few hours later the same morning, they were intercepted and killed by Jammu and Kashmir Police during a three hour long encounter at Ban Toll Plaza. A huge quantity of arms, ammunition and explosives including 11 AK 47 and AK 56 rifles, three pistols, 29 grenades, wireless sets among other things were seized from them.

The opening of the tunnel on Indian side was strengthened and reinforced with sand bags carrying markings as Karachi, Pakistan, It was carefully concealed inside thick bushed and meticulously covered with soil and wild growth and on other side of the border opposite it were Pakistan Border Out Posts Chak Vhura, Rajab Sahid and Asif Sahid.

It appears that proper engineering work has gone into its making, DGP said, adding “Pakistan always tries to wash off its hands by deny its role in terror activities in Jammu and Kashmir stands exposed’’. “Right from the beginning four slain Jaish-e-Mohammad militants had infiltrated into Jammu and Kashmir to their killing in an encounter at Ban Toll Plaza, all the available technical evidence was strongly pointing fingers towards Pakistan,’’ he added.

“All the technical evidence and the gadgets seized from slain militants was pointing fingers towards Pakistan,’’ he said, adding “all the gadgets, medicines, telephones, wireless sets, eatables and even the clothes had Paskistani markings on them’’. “Now, the cement bags used in the tunnel too have Pakistani markings. The cement bags bearing similar Pakistani markings were found used in another tunnel which was detected in Bengalad area of Samba sector sometimes back,’’ he added.

In reference to the area where slain militants infiltrated from Pakistan side, the UT police chief said that “all the technical evidence available with us lead to this point only’’. “It appears to be a fresh tunnel, but it may have been used by militants earlier also,’’ he added.

Earlier too, such underground cross-border tunnels were detected in areas along the international border in Jammu region. In 2012, BSF had detected a 400-metre long tunnel in Samba sector and another near Line of Control in Palanwala sector in 2014. The same year, another tunnel was detected in Chillyari area of Samba. This one was dug nearly 25 metres inside the Indian territory.

In March 2016, a tunnel coming from Pakistan side was detected 30 metres inside the Indian side in R S Pura sector and another in Samba Sector in 2017.

During last week of August 2020, it had detected a 150-160 mts long underground tunnel coming from Pakistan side into Samba district’s Bengalad area.