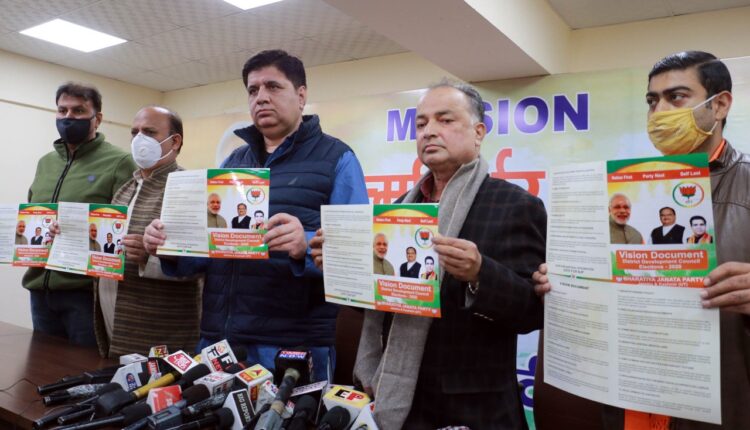 Jammu, November 26: Bharatiya Janata Party here on Thursday said that if it is voted to power in the DDC elections in Jammu and Kashmir, it will retrieve all the state and forest land from its unauthorized occupants including Abdullahs after demolishing the structures raised by them.

Releasing party’s vision document for DDC elections – 2020, BJP’s chief spokesman Sunil Sethi said that “criminal prosecution will also be launched against those including bureaucrats who had facilitated those encroachments’’. The statement assumes significance as UT’s Anti-Corruption Bureau had only last month again indicted Baseer Khan, an advisor to Jammu and Kashmir Lt Governor Manoj Sinha, in the 2009 Gulmarg land scam. Following this, Special Judge (Anti-Corruption), Baramulla had decided to hear final arguments on framing of charges against Khan, who is one of the 20 people booked by the then Vigilance Organisation (now ACB) for misusing their official position in transferring state land earmarked for development of tourist infrastructure in Gulmarg to private persons. Khan was then Baramulla Deputy Commissioner.

Pointing out that BJP has zero tolerance for encroachments, Sethi said “NC offices at Jammu and in Srinagar are on state land and their occupation of it has been regularized under Roshni Act. The Abdullahs’ house in Jammu’s Bhatindi area, where two former chief ministers Dr Farooq Abdullah and Omar Abdullah live, too is built on a piece of land, a major portion of which belongs to forests,’’ he said.

“So in coming days, the land from both these offices will be retrieved and these offices closed,’’ the BJP leader said. Similarly, “if our party comes to power in the DDC elections, we will retrieve the forest land under Abdullahs’ house and restore it to forests,’’ he said, adding the “forest land is meant for wild life and politicians and their houses have no place on it’’.

When his attention was drawn towards a status report filed by Divisional Commissioner Jammu and Principal Chief Conservator of Forests in the Jammu Kashmir High Court that B N College being run by former BJP minister Abdul Gani Kohli and his family in Channi Rama area of Jammu is on State land, Sethi said “our vision is clear…whosoever has done encroachment, all the land has to be retrieved from him’’. “And. those who have facilitated these encroachments, criminal cases will be registered against them as well,’’ the BJP leader said, adding that “their prosecution will also take place as the party feels that whosoever has committed the crime shall face the punishment for it’’.

“Whosoever is involved – former CMs, their ministers, businessmen who are funding political parties, bureaucrats and even police officers, action will be taken against everyone,’’ Sethi said. “The BJP’s official stand is that it will not justify any encroachment nor protect anybody irrespective of his association with any region or political party,’’ he said, adding “we feek tha an encroacher doesn’t have any religion, nor political affiliation or ideology. We are not targeting any particular party nor protecting any party’’.

The BJP leader accused the NC, PDP leaders have encroaching government lands, looting state resources during past 70 years under the garb of Article 370. Those who had nothing at the beginning of their political career are today running in crores, he said, adding “we will expose them and make them accountable for each penny’’. Whatsoever encroachments have been made in Jammu Kashmir will have to be removed so that there is adequate land available for development projects including new industries and housing colonies among other things, he said, adding that “our fight against Article 370 was for this only’’.

Apart from removing encroachments on state and forest lands, BJP in its vision document promised improved power and water supply, strengthening road network to global standards in the UT, identifying and promoting areas of tourist potential across all the regions so as to boost local economy and create employment opportunities, besides ensuring regional equality in matters of development among other things including pro-people government schemes like regularization of daily wagers, casual and contractual labour, commitment against corruption, 100 per cent job reservation for locals and application of beneficial central service laws to the UT.