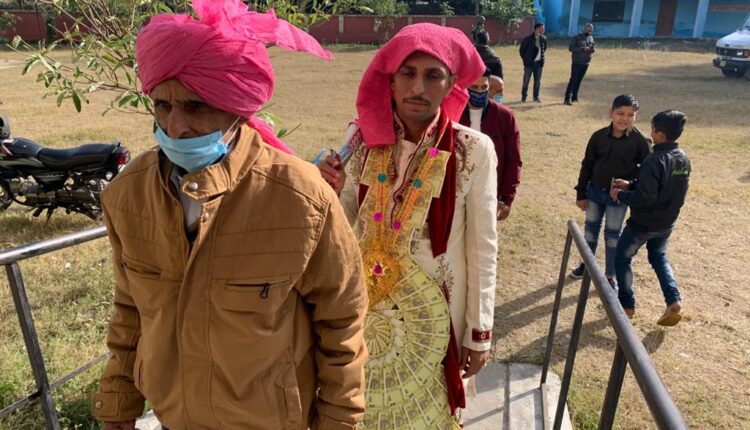 Jammu, November 28: Kotgarhi Panchyat in Akhnoor tehsil doesn’t have a dispensary and its link road from main stop on the Akhnoor-Jourian main road is also in a dilapidated condition, yet Pritam Lal, 60, a refugee from West Pakistan has come to cast vote at Government High School, Kotgarhi to elect his representative for the first ever District Development Councils being set up in Jammu and Kashmir.

“Politician always come with tall promises during elections and disappear after the polling, but I have come to cast vote as it has made me feel that I too matter in Jammu and Kashmir,’’ he said as he came out of the polling booth after casting his vote. “Living as refugees for the past 73 years, we had no right even on the land we have been living here for many generations,’’ he said, adding that “at least his four children, all of whom are post graduate in two or more subjects and still unemployed, will now be able to apply for a government job in the Union Territory’’.

He was accompanied by his nephew, Mangat Ram, 31-year-old Seema Suraksha Bal (SSB) personnel, who had come from his marriage function to cast vote. “My ancestors had been craving for getting it in the erstwhile state and now after 73 years, when I have got it after the abrogation of Article 370 on August 5, 2019, I must cast my vote,’’ he added.

Though the number of such families in two DDC constituencies going to first  in Jammu district – Maira Mandrian and Bhalwal Brahmana, is not much, their participation in DDC elections assumed significance as it was for the first time refugees from West Pakistan, Gorkhas and Valmikis are participating in the local body polls in Jammu and Kashmir. Labha Ram Gandhi, a leader of West Pakistani refugees said that their’s are 22,000 registered families in Jammu and Kashmir, mostly living in Bishnah, R S Pura, Marheen and Kathua areas, which are going to polls in 3-7 phase of DDC polls.

Prior to abrogation of Article 370 on August 5, 2019, these people though living here for the last three and four generations were allowed to cast vote in Lok Sabha elections, but not in the Assembly and Local Body polls.

“Today is a historic day as Hindu-Sikh refugees from Pakistan, Valmikis and Gorkhas, all victims of atrocious Articles 35A and 370, exercising their right to vote for the first time in 73 years,’’ said Prof Hari Om, a retired Jammu University professor and political analyst. “It’s a great moment for the nation and a tight slap on the pro-Pak and pro-China Gupkar Gang headed by Farooq Abdullah,’’ he added.

Many a people who had come to the polling stations in Akhnoor tehsil to cast vote with the hope those who get elected in these elections may finally get the power to initiate development works. “The Kotgarhi panchyat with nearly 400 families does not have a dispensary and people have to travel 3 kms away to Akhnoor even in case of minor problem,’’ said Rakesh Kumar, a Panch. “We have brought it to the notice of authorities during all the back to village programmes, but of no avail,’’ he said, hoping that DDC elections bring the power to elected representatives for initiating development works.

In Sohal panchayat, Kaku Ram had brought his 100-year old mother Ambo Devi. His village Kangral (Nud) had no pucca road. The much promised toilet scheme too has not been implemented here,’’ he said, adding “but we have to cast vote the DDC elections may get the powers to elected local body members for initiating development works in their areas.