Every terror attempt will be dealt firmly: J&K Police Chief 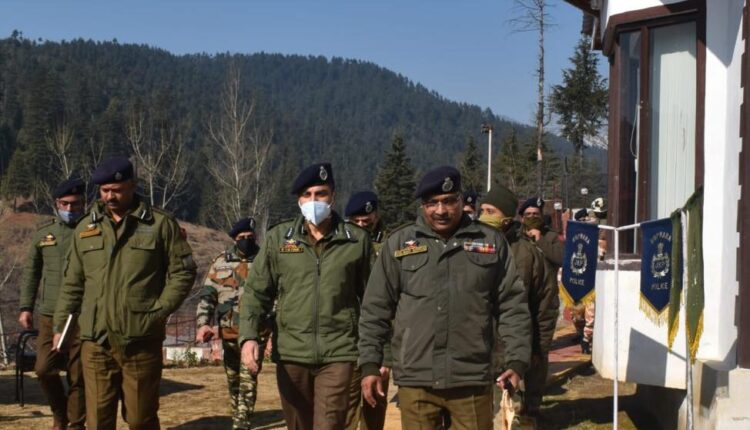 Accompanied by Deputy Inspector General of North Kashmir, Shri Shri.Sulaiman Chowdary, the DGP first visited Kupwara and then to Handwara and in the afternoon he visited Baramulla. The DGP chaired joint review meetings at these district headquarters.

Reviewing the security arrangements put in place by different security agencies for the 8th phase of District Development Council (DDC) and by-elections for Panchayat and Urban Local Bodies (ULB), the DGP stressed for strict and elaborate security arrangements around the polling booths for peaceful conduct of final phase of polling. The DGP stressed upon the officers to ensure high alertness, especially in the border areas to check any infiltration attempt. The DGP said that subversive elements are attempting to create disturbance here and stressed upon the officers to reaming extra vigilant and alert. He appreciated officers and officials of JK Police and other security forces for tireless efforts during the past seven phases that ensured incident-free elections, so far.

The DGP said that safety and security of people is our prime responsibility and every effort of the terror groups to disrupt the peaceful atmosphere of JK would be neutralized firmly. He stressed upon the officers to maintain close coordination within their ranks and strengthen relations with the people to achieve better results.

The DGP commended the police and security forces for their successes against the terrorists and their sympathisers during the year. He said that because of the hard work put in by all not only a number of commanders were neutralized but various terror modules were also busted. He said that with the help of parents a number of youth left the path of terrorism and joined back to their families.

During these meetings, the DGP was apprised by the SSP Kupwara Shri. Shriram Ambarkar, SSP Baramulla, Shri Abdul Qayoom and SP Handwara Dr.  G.V Chakravarthy and officers from other security forces about the deployment of forces and preventive measures put in place to ensure peaceful polling in all the constituencies going for polls in final phase. The officers also briefed the DGP regarding the security measures on anti-terror front.