A day after issuance of job notice, J&K govt withdraws it following protests 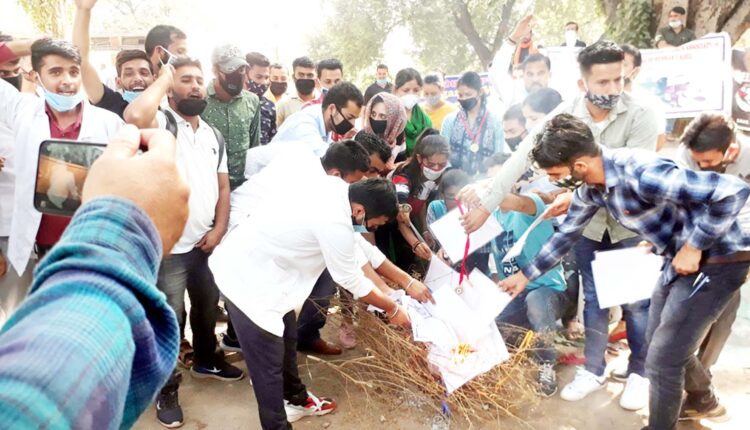 Jammu: Faced with sharp criticism over the discrepency in number of posts advertised for both the Jammu and Kashmir divisions, the UT government on Saturday withdrew an advertisement seeking applications for the posts of Agriculture Extension Assistants.

Significantly, this came a day after the issuance of advertisement by the Jammu and Kashmir Services Selection Board.

“Regarding #JammuAndKashmir SSB advertisement for Agriculture Department posts, I have taken cognizance of inputs from aspirant youth and discussed the issue with Principal Secretary Sh Naveen Choudhary,’’ tweeted Dr Jitendra Singh, Union Minister of State in the PMO. “He (Choudhary) is examining the matter,” he wrote, adding “meanwhile, the advertisement is deferred/withdrawn”.

The Jammu Kashmir Service Selection Board had on Friday issued an advertisement for 136 posts in Kashmir and 20 in Jammu.

Principal Secretary Agriculture, Horticulture, Fisheries, Animal and Sheep Husbandry, Navin Kumar Choudhary, however, said that the posts got advertised by mistake. “It was nearly two year old reference and the Agriculture Department officials did not realize that they have not withdrawn it,’’ he said, adding that “since the reorganization of the agriculture department is under consideration, these posts will be merged with other posts’’.

Pointing out that an attempt was being made to create an unnecessary controversy out of nothing, he said that sometimes such mistakes do happen in departments as big as Agriculture where officials doing the reorganization work and those responsible for taking care of the man power are different. However, the mistake was detected on time and accordingly rectified, he added.

However, before the withdrawal of advertisement notice, the divide between Jammu and Kashmir divisions had come in the open, triggering sharp reactions from critics of the BJP.

“Jammu province votes for BJP and ungrateful BJP despises her and appeases Kashmir and the privileged people it house,”  wrote Hari Om, a retired Jammu University Professor and senior leader of IkkJutt Jammu — a Hindutva outfit seeking separation of Jammu division as a state. He said the separation of Jammu as a state was the only solution.

“The new normal for j&k is : Posts notified by jkssb and jkpsc must be greater in number for jammu division Compare to kashmir division,” tweeted one Younis Javaid Bhat from Kashmir. “Maximum number of candidates in selection list must be from jammu. Otherwise posts will be withdrawn and selection lists cancelled,” he wrote in response to minister’s tweet.

Corona vaccine will be free across India: Dr Harsh Vardhan

One whose whereabouts unknown for more than 7 years not “deserter”, but be presumed dead: HC