Corona vaccine will be free across India: Dr Harsh Vardhan 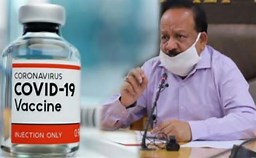 New Delhi: Union Health Minister Dr Harsh Vardhan on Saturday said that Corona vaccine will be provided free of cost to all the people across India.

“Not only Delhi but the free vaccine will be given in every corner of the country,’’ he said after reviewing the dry run in a government hospital. “I urge people not to believe any rumours. Our main criteria in vaccine testing is safety and efficacy, there will be no compromise,’’ he said.

In Delhi, the mock-drive is being operated at three places, including the government-run Guru Tegh Bahadur Hospital at Shahdara, the Primary Health Center at Daryaganj, and the private Venkateswara Hospital at Dwarka.

Senior officials of the Ministry of Health have informed Dr Harsh Vardhan about various reforms made for the rehearsal, without any hindrance throughout the country. These include increasing the number of telephone operators to answer every possible question asked by the teams conducting the rehearsal at the ground level.

In the first phase of inoculation drive, one crore healthcare workers and two crore frontline workers would be given free vaccine, he said in a tweet. The details of how the remaining 27 crore priority beneficiaries will be vaccinated till July are getting finalized, he added.

The central government plans to vaccinate nearly 30 crore persons in the first phase of the immunisation drive. The vaccine will be administered to one crore healthcare workers, along with 2 crore frontline and essential workers, and 27 crore elderly, mostly above the age of 50 with co-morbidities.

The comment is significant, given the fact that India has recorded the second highest numbers of corona infections after the United States.

A day after issuance of job notice, J&K govt withdraws it following protests