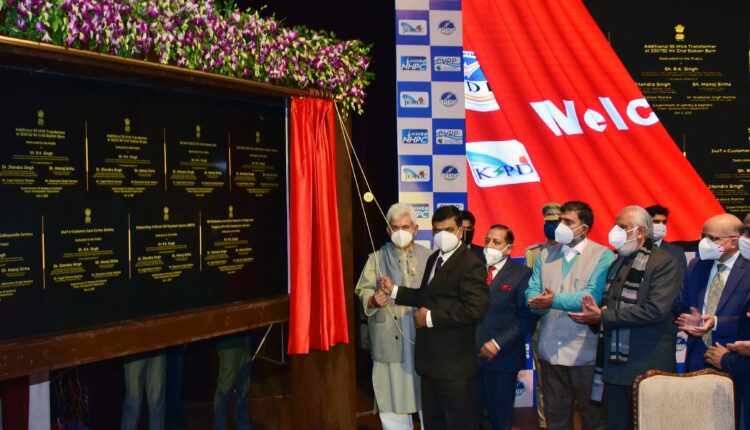 The occasion also witnessed inauguration of as many as 19 important projects of PDD aimed at greater generation, efficient transmission and better distribution of power supply in J&K during the Mega inauguration ceremony.

Speaking on the occasion, the Union Minister of State (Independent Charge) for Ministry of Power, New & Renewable Energy, Raj Kumar Singh assured all support from Government of India to the J&K Government for various reforms in the power sector. Hydro electric potential successfully ushered the era of development in various states including Sikkim & Himachal Pradesh. J&K should replicate the model, he said, adding that according to national average, electricity supply in rural areas is for about 20 hrs and in urban areas 22-23 hrs. Jammu and Kashmir too will reach the milestone if the pace of development is kept the same, he added.

Locals will be trained and given employment in NHPC ventures; besides NHPC will see for development of small hydro projects also, he maintained. We have to do our bit of duty to see electricity reaching every household 24×7, he said.

Lt Governor Manoj Sinha while speaking on the occasion observed that the MoUs signed today would attract investments worth Rs 35,000 crore for Jammu and Kashmir power sector and ensuring the region’s energy security and 24-hour power supply to the people of J&K.

“J&K is taking a quantum leap from being power deficit to becoming power surplus in the next four years. For uninterrupted power supply, this is the most significant move by the J&K government”, said the Lt Governor. As per the provisions of these MoUs, the projects will be handed over back to Jammu and Kashmir after 40 years of commercial operation which was not in case of earlier projects allotted to NHPC Limited, he remarked.

Speaking on tapping the full potential of hydro energy, the Lt Governor observed that the vision of the Government is to effectively harness hydro energy resources of J&K with a goal to double the energy generation by 2024 and also to prepare a strategy for efficiency through policies, monitoring mechanism to ensure energy security for economic and social benefits.

Hydro electricity would be a major contributor to the world’s energy security in view of the global shift towards sustainable energy and reduction of carbon emissions. Our efforts are steering Jammu & Kashmir towards its energy sufficient and empowered future, he added.

The Lt Governor said that the numerous hydro resources of Jammu & Kashmir are capable of generating 14,867 MW power but the potential had not been fully exploited, and only 3504 MW power was being generated till now. The works started now will ensure that another 3498 MW power is generated in the next three to four years.

The potential which was achieved in 70 years would now be doubled within the next four years only, maintained the Lt Governor. J&K’s journey from a power deficit to a power surplus region can only be realized with vision and planning. Entire overhaul is being made possible with the support of the Central Government without any expenditure by the UT administration, the Lt Governor remarked.

Out of the two agreements, the NHPC would work in association with the administration at the first and, the languishing Sawalkot project would be handed over to NHPC for completion under the second. The project has been perpetually postponed since its conception in 1984 and was expected to generate 1856 MW power, he added.

Underscoring the significance of clean, affordable and reliable energy as key factors for growth of industries, businesses and society, the Lt Governor said that the UT Government is working on environmentally sustainable solar plants to augment renewable energy generation while reviving small hydro projects pending for a long time.

Jammu & Kashmir was deliberately prevented from attracting investments and despite having abundant potential of power generation; its energy needs were not addressed. With the execution of new mega power projects, a number of other employment avenues would be generated for the locals. In addition to power generation, strengthening its distribution and transmission infrastructure would also receive our equal efforts, the Lt Governor maintained.