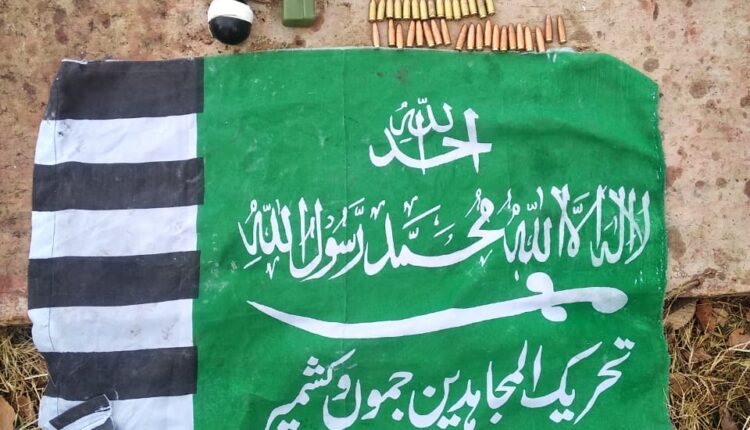 Jammu: The Jammu and Kashmir Police on Sunday seized five more grenades along with a piston and 35 rounds from a village along the Line of Control in Mendhar area of Poonch district and claimed to have foiled a “major terror plot to fuel tension in Jammu division”.

This was the third consecutive seizure of arms, ammunition and grenades in Mendhar after the recent busting of a terror module and arrested of three terrorist associates on December 28 last, police said. They included Mustafa Khan of Galuta, besides Mohammad Yaseen and Rayees Ahmed, both resident of Dabbi Balakote.

About Sunday seizures, vital clues were developed during sustained interrogation of the arrested terror associates and a joint operation by police and army launched in village Dabbi, which falls ahead of the barbed wire fence along the Line of Control in Balakote area.

This terror module owes allegiance to “Jammu and Kashmir Gazanvi Force” which is being operated  from POJK, police said, adding that terror outfit, apart from other terror acitivities,  was now attempting to target religious places also so as to trigger communal tension in the otherwise peaceful Jammu division.

Earlier, police had initially recovered six hand grenades from the arrested terror associates, who revealed that grenades were to be lobbed on religious places in Ari and Mendhar town area of Poonch district.

The second recovery was made from Dabi village wherein two pistols, seventy bullets and two grenades were recovered.

” The handlers from across used to drop the consignment in hidden patches near the LoC and these arrested terrorist associates then used to pick it up for further carriage in hinterland,” it added.

The total recovery made so far include 13 grenades, three pistols, five pistol magazines,

One whose whereabouts unknown for more than 7 years not “deserter”, but be presumed dead: HC