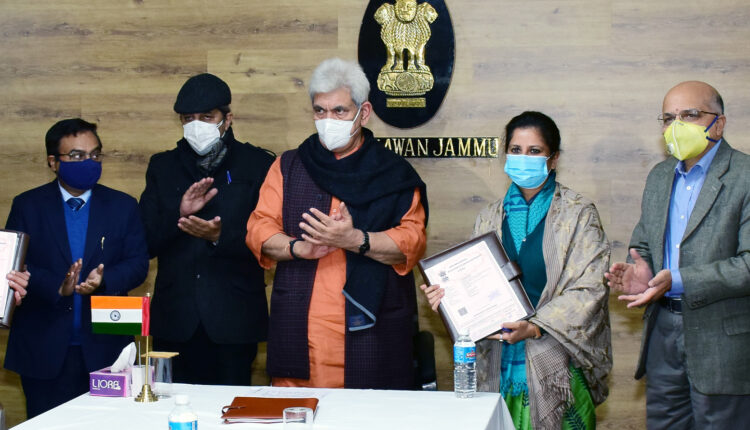 Jammu: In yet another intervention to bring reforms in the Information Technology sector in J&K; a Memorandum of Understanding (MoU) was signed between NBCC and JK IT Infrastructure Development Company for establishing IT Towers in both the Capital cities of Jammu and Srinagar, in presence of Lieutenant Governor of J&K, Manoj Sinha.

Speaking on the occasion, the Lt Governor observed that the development of IT infrastructure in Jammu and Kashmir would go a long way in creating conducive environment for Startups, economic growth and creation of employment opportunities. “Growth of the Information Technology sector is absolutely imperative for economic growth and for creation of gainful employment opportunities” he remarked.

The Lt Governor said that improvement in the regulatory environment and business ecosystem has been a major priority of the Jammu Kashmir government. A number of reforms have been implemented to promote industry and services, he added. “We have enough money and resources to give a fillip to the Information Technology sector and last year alone, Rs.156 Crore was provided to make substantial investment for effective penetration of digital technology in the entire Jammu and Kashmir”, he said.

Pointing out that many youngsters from the UT, who are working in cities like Bangalore and Gurugram may also like to return and contribute to our efforts of promoting innovation entrepreneurship culture, he said that the UT Government is working with a vision to promote the latest scientific and technology driven innovations to make J&K self-reliant. “Now, this infrastructure is expected to significantly increase Jammu and Kashmir appeal to top national investors in the field of Information Technology and Enabled Services,” he added.

Detailed presentations were given on establishment of IT Towers in J&K, proposed sites and future plans thereof.