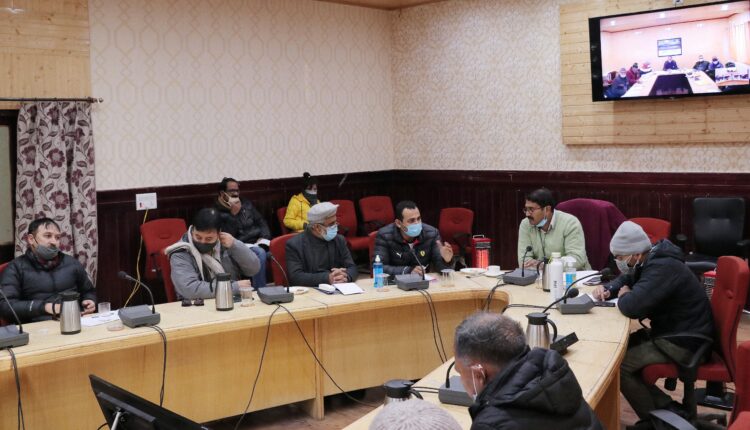 Leh: Keeping in view the closure of Leh-Manali and Leh-Srinagar national highways, as also the restriction on vehicular movement due to heavy snowfall, Divisional Commissioner Ladakh, Saugat Biswas on Wednesday convened a meeting to take stock of food supplies for the winter in both Leh and Kargil districts.

Divisional Commissioner Biswas inquired about the stocking of milk, sugar, butter, firewood, fodders, LPG cylinders and other essentials commodities for the winter. The concerned officials from both districts updated the Divisional Commissioner on the stocking of all the essential commodities. Biswas also directed Secretary Ravinder Kumar to airlift essential commodities from Delhi and Chandigarh through the Indian Air Force’s aircraft or private cargo planes.

Taking note of the status of oxygen supply in both regions, Divisional Commissioner Biswas directed Director Health, Ladakh Dr Phuntsog Angchuk to take stock of the status of oxygen plant supplies at the earliest and to ensure adequate supply of oxygen at both the district hospitals. CMO Leh, Dr Motup Dorje updated the Chair on the procurement of pharmaceutical stock in Leh in December.

He asked the Additional Deputy Commissioner, Kargil to check rate lists and the quality of food items in Kargil district. He also directed concerned officials to take strict actions against violators.

While discussing the issue of supplying essential commodities to inaccessible areas, Biswas directed Director, CAPD, Anil Kaul to dispatch essential commodities such as salt and sugar in MI-17 helicopters to remote areas such as Zanskar at the earliest. He also directed Kaul to put in an advance requisition to the Government of India for supply of sugar.

Saugat Biswas inquired about the issue of electricity supply in Demjok village. He directed Superintending Engineer (SE) PDD to ensure the operation of DG set to provide electricity to the village at the earliest. He also directed concerned departments in Kargil to clear snow on the highways in both Zanskar and Drass. He also asked them to submit a daily report on the clearance of snow to the office of Divisional Commissioner and both the district administrations.