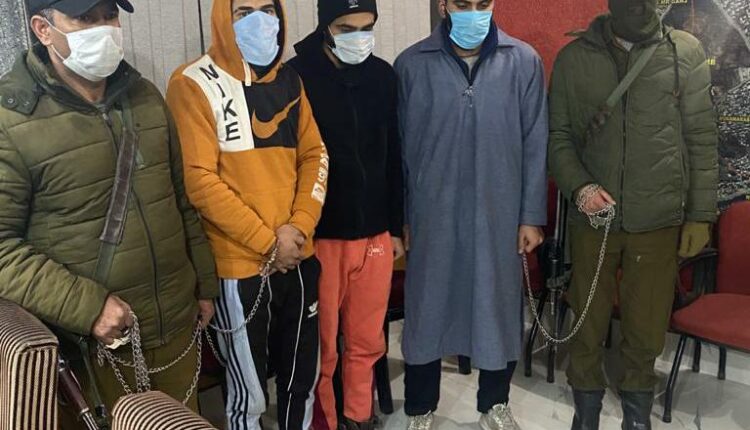 Three held for murder in Srinagar

Srinagar: Three people, who allegedly stabbed to death one Zayan Chasti of Rainawari area in Srinagar on Monday night, have been arrested by police. The accused have been identified as  Mohammad Zahid Bhat, Faizan Fida Bhat, both residents of Ellahi Bagh Soura, besides Wahid Altaf Kaullah of Jabgri Pora, Nowhatta, Srinagar. They were arrested on Tuesday within12 hours of their committing the crime.

Srinagar: UT Police on Wednesday arrested two militant associates from Bulbul Bagh Barzulla in Srinagar. Identified as Muzaffar Jan of Old Barzulla and Abass Shafi Najar of Natipora, both Srinagar, they owed allegiance to Lashkar-e-Toiba. Two Chinese pistols along with two magazines and 13 rounds were seized from them.

Srinagar: Nearly two dozen people have been arrested by UT Police in connection with cyber frauds and hacking in Kashmir Valley. This followed raids at diference call centres across Srinagar district after the registration of a case under various provisions of IT Act and Indian Penal Code at Cyber Police Station, Kashmir zone, earlier this month. The investigations in the matter are in progress, sources said.