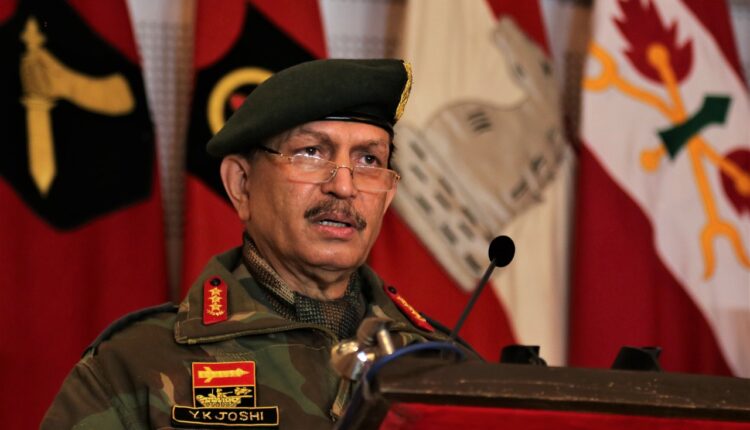 Udhampur: General Officer Commanding-in-Chief of the Northern Command, Lt General  Yogesh Kumar Joshi on Friday said that army in the Union Territories of  Jammu & Kashmir and Ladakh was contending with triple challenges.

Bringing out the complex, volatile, uncertain and ambiguous conflict paradigm in the Northern Command, he while interacting with media persons on the occasion of Army Day here, said that “first we have the Western adversary that is Pakistan which has not relented from using terror as an instrument of state policy’’.

“Secondly, we have northern borders where we have seen the Chinese belligerence on the Line of Actual Cotrol where it has tried to alter the status quo which has been contested with resolve and courage by the Indian Army,’’ he said. Thirdly, the internal situation in J&K which is stable and under control but has the propensity to flare up at any time, he said, adding that “there is also the collusively factor with threat ranging from supplying of weapons to sharing of operational practices and so on’’.

Pointing out that relentless operations on the Line of Control backed with robust multi agency grid in hinterland has “forced the deep state in Pakistan to recalibrate its approach to handle this situation’’, he said the terrorist network across are trying hard to abet recruitment by extensive use of social media.

The recent DDC elections have conveyed the resolve and will of the Awaam to shun separatism and embrace democracy. The abrogation of Article 370 and improvement in governance has been a major game changer and helped in restoring faith of the common people in the institutions of the Government, he added.

Indian Army has played its designated role of creating an ecosystem of safety and normalcy during COVID. “Op Sadbhavna” has been pivotal in providing avenues of employment and education to the youth, the GOC-in-C said.

About Line of Actual Control, Lt General Joshi said “the challenge in Eastern Ladakh have been further complicated by vagaries of weather and terrain’’. “The Indian Army has displayed immense grit and determination to match the Chinese belligerence and giving them a befitting reply,’’ the Army Commander said, adding “we Northern Command is now perched at a position of operational advantage and are negotiating with the PLA from a position of equivalence’’.

He also inaugurated the launch of the musical talent hunt “Shaurya” and lauded the efforts of “Mausqui Studios”, who along with active support of the Northern Command Army, have conceptualized and organized musical talent hunt programme.  Renowned Bollywood celebrities and legends like Shukhwinder Singh and Dilshaad Shabbir Shaikh have promoted the talent hunt and provided an opportunity at the doorsteps of the youth of J&K to help them explore new vistas in the music industry.

Over  2000 talented youth of Jammu & Kashmir joined the online audition which was spread over seven days. This was followed up by offline audition for four days, two days each form Jammu and Srinagar.  Finally, ten talented youth comprising vocalists and instrumentalists have been selected to form the J&K Band. This Band will be groomed before they showcase their talent on 18 Jan 2021 in Srinagar.

While the entire Band will share the stage with famous singer Sukhwinder Singh, the top three will be performing with him. Post this performance, the Band members will be travelling to Mumbai for training and grooming and undertaking contractual performances.

No one should make any mistake of testing Indian Army’s patience:Gen Naravane on Ladakh standoff