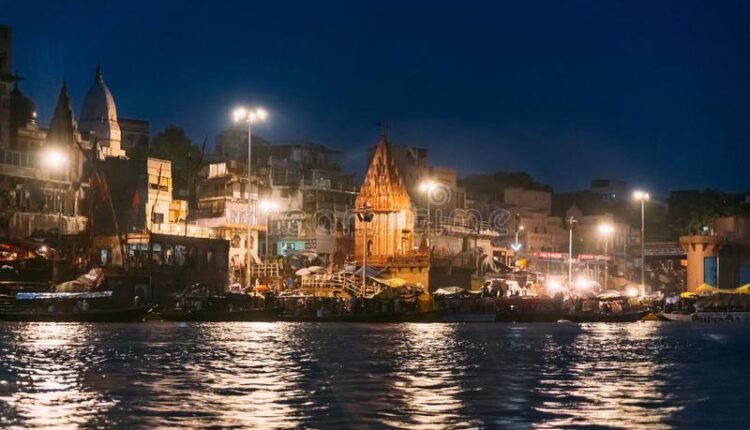 Varanasi: The flow of Ganga between Lalita to Manikarnika Ghats has changed from the debris of Vishwanath corridor in Varanasi.

The Ganges has gone away from these ghats. At the same time, the connectivity of ghats between Dashashhavadh to Manikarka has also been shattered. It has a direct bearing on the Mahacrematorium at Manikarnika Ghat.

The dead bodies are not being washed out of gangwater before the funeral. This situation has arisen due to the concrete wall being prepared for the ladder of the Ganga bank corridor.

Azad Took-Up The Eviction Of Land Issue With Union Home…

For the Vishwanath corridor under construction in about 50 thousand sq. m. There is a ladder between Lalita Ghat to Manikarika Ghat along the Ganga. Also, construction of open platform of corridors is proposed near Jalsen Ghat.

The working agency has bridged the soil in a length of about 800 metres and 200 metres to prevent water along the Ganga. Thereafter, the RCC wall is being erected in Ganga to a depth of about five metres. The ladder will be constructed through this. The flow of Ganga water first proceeded from Lalita Ghat to Jalsen, Manikarka. Now, from Lalita Ghat to Serhe, it is flowing towards the ghat.

Ban on walking: Walking on the ghat side has also been banned from walking over the deposits. The entire area has been barricades. The security personnel stationed there prevent the people from going on foot. It is going to return to the tourists and devotees who are travelling on foot ghats. Sanjay Whites, executive engineer-PWD (Kashi Vishwanath section) says that debris and soil have been deposited due to work along the ghat. It will be removed as soon as the work is done. People have been banned for security reasons.

From Surgical Strike to strict action against terrorism, giving befitting response on…