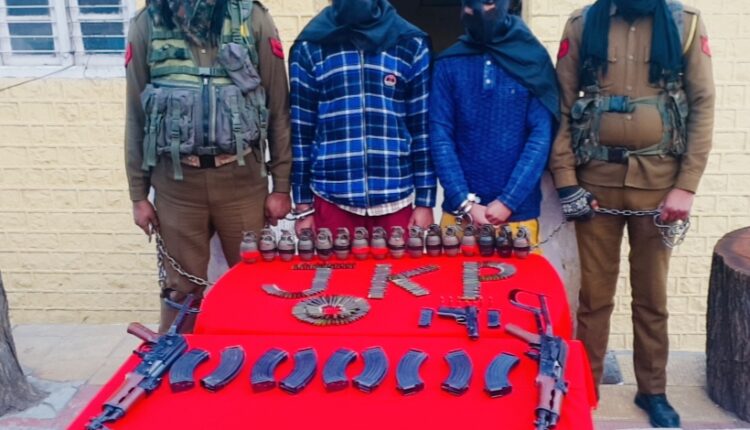 Jammu: Jammu and Kashmir Police on Monday arrested two Jaish-e-Mohammad along with arms and ammunition and claimed to have busted a terror module in hilly Ramban district.The seized arms and ammunition had been dropped on Indian side of the international border in Samba district by Jaish-e-Mohammad handlers in Pakistan with the help of drone, said Inspector General of Police for Jammu zone, Mukesh Singh. These included two AK-74 rifles along with nine magazines and 269 rounds, 16 grenades, besides one pistol and two magazines.Pointing out that this followed a joint operation Ramban district police and Special Operation Group (SOG), Jammu, IGP Mukesh Singh said that the initial investigation revealed that two terror operatives, Umar Ahmed Malik S/O Abdul Ahmed Malik and Suhail Ahmed Malik S/O Mohd Yaseen Malik, both residents of Semthan, Bijbehara, Anantnag, who clandestinely travelled from Kashmir to the International Border at Vijaypur, Samba and received the arms and ammunition dropped there with the help of Drones. Their travel to the international border was part of a terror plot hatched by Kashmir based terrorists and their Pak based JeM handler Aqib @ Alfa from Budgam.  Further investigation of the terror module is going on, he added.Arms dropping by Pakistani drones has become anew worry for security forces in Jammu and Kashmir. At least four cases of arms dropping by drones have earlier come to the notice of security agencies during the past six months. These include:

Sept 19: 2 AK-56 rifles, 6 magazines and 180 rounds, 2 Chinese pistols with 3 magazines and 30 rounds, 4 grenades, 2 pouches and Rs 1 lakh cash seized with arrest of three people in Rajouri district, along the LoC.

June 20: BSF shot down a drone in Kathua’s Hiranagar sector along the international border. It was found carrying a payload of nearly 5 kg, including a US-made M4 semi-automatic carbine, 2 magazines, 60 rounds, and 7 Chinese grenades.