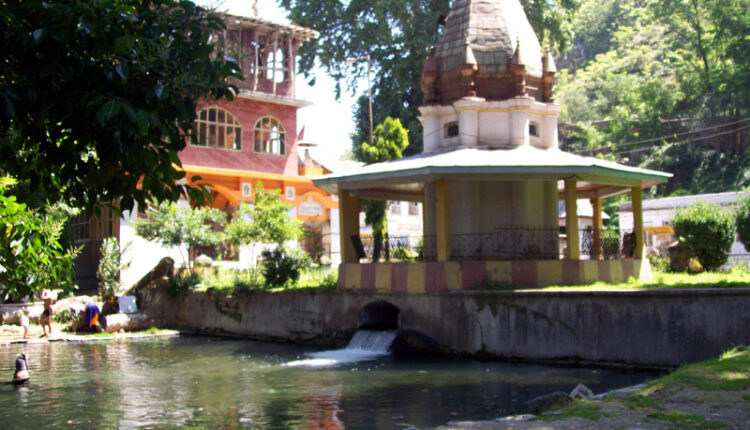 Jammu: National Conference on Friday sought issuance of an ordinance with regard to implementation of the Kashmiri Hindu Shrines and Religious Places (Management and Regulation) Bill, adding that this will be one of the major confidence building measures to pave the way for the honourable and safe return of displaced people back to their homes and hearths.

“We urge the Centre, as also Lieutenant Governor Manoj Sinha to facilitate the implementation of the bill, brought twice by the National Conference in the Legislative Assembly but could not get passage due to inherent contradictions of several political parties”, Provincial Vice President Anil Dhar said while addressing a press conference at Sher-e-Kashmir Bhavan here. He was flanked by Provincial Vice President Som Nath Khajuria, Chairman of the NC Minority Cell Bushan Lal Bhat, President M.K Yogi and Jatin Bhat.

Anil Dhar said that the National Conference piloted the Bill twice, first by Abdul Rahim Rather and later by Saif-ullah Mir on the directions of Dr Farooq Abdullah and Omar Abdullah with an objective of transparent management of the shrines and temples across the Kashmir Valley, besides their protection and safeguard. He regretted that due to politics, these bills could not be passed, which has caused immense concern and dismay among the displaced Kashmiri Hindu population.

He said the Ordinance will help in taking care of these properties and the boards should be established on the pattern of Gurdwara Prabandhak Board and Wakf Board.

In reply to a question, NC leader Som Nath Khajuria also supported the demand, saying similar boards should be constituted for transparent and fair management of shrines and temples in the Jammu region.

“Giving management of these shrines and temples to the Boards will help in transparent superintendence of the managements, which is imperative for raising facilities and ensuring adequate upkeep of the places of worship that are thronged by large numbers of devotees”, Khajuria added.

Addressing the media, Bushan Lal Bhat extended full support to the organisations of Kashmiri Hindus who were spearheading a sincere campaign with regard to establishment of Shrines and Temples Board of Kashmiri Hindus.

Bhat said that the cause is common and all should work towards achieving the objective in terms of the issuance of Ordinance by the government.

M.K Yogi said that the proposed Board will go a long way in preserving the valuable religious treasure of Kashmiri Pandits which stands testimony to the glorious and pluralistic ethos of Jammu and Kashmir.

Jatin Bhat also spoke to the media and sought earnest measures for ensuring the issuance of Ordinance in this regard to satiate the urges and aspirations of the displaced Kashmiri Hindus.