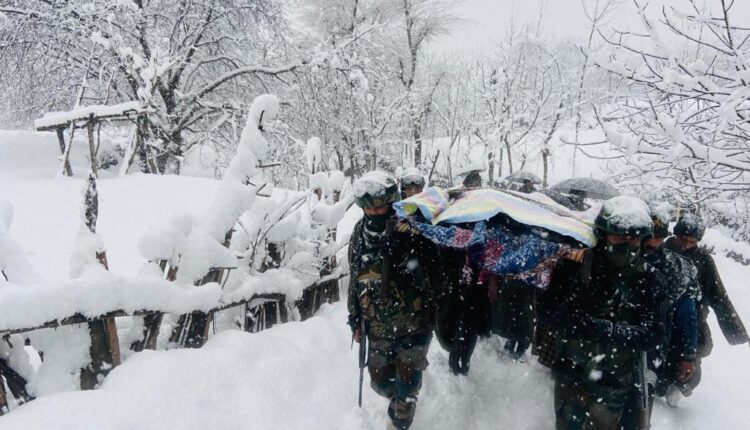 Kupwara: Troops of 28 Rashtriya Rifles walked 6 km in knee deep snow carrying a mother and her new born baby to their home in remote Dardpura village of Lolab area in Kashmir’s Kupwara district.

Pointing out that both the mother and child were trapped in snow blizzard, an army spokesperson said that MARKUL COB of 22 RR received a distress call from one Farooq Khasana of Dardpura. As all roads in the area were blocked due to heavy snowfall, the jawans immediately swung into action and rescued both the mother and her child carrying a stretcher on their shoulders to their house in remotest area of Lolab.

Father of  the new born baby expressed his gratitude to the Army for prompt response and saving his family. He said that Markul Camp, which has always been the last resort for Dardpura villagers, never failed them.

This has been the second time the army unit has reached out to the needy in their area of responsibility during a fortnight. Earlier, they responding to a distress call from a local resident of Pethawadar in Kupwara district’s Handwara area had carried a pregnant woman on their shoulders to the hospital wading through knee deep snow a distance of nearly 2 km. The woman was in her advance stage of pregnancy and roads in the area were blocked due to heavy snowfall.