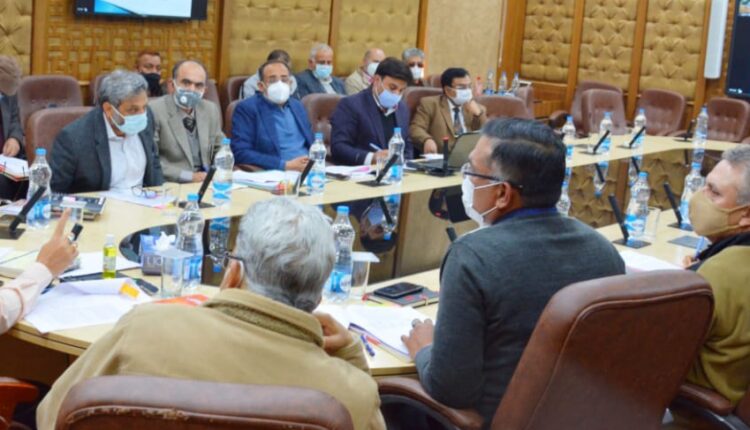 Chief Secretary issues directions for widening of entire track, laying of cement tiles and ralling from Baltal side

This came to be known at the 10th meeting of the high level committee of Shri Amarnathji Shrine Board chaired by Chief Secretary BVR Shubrahmanyam on Sunday to review preparations being made a safe and hassle-free Amarnath yatra 2021. He enjoined upon the administration to make preparations for an expected footfall of six lakh pilgrims to Shri Amarnath Shrine in South Kashmir Himalayas this year.

He issued directions for appropriate widening of the walking tracks, installation of railings and construction of retaining walls with special focus on laying down of pre-fabricated cement tiles on tracks from Baltal.

He also directed the Divisional Commissioners of Jammu and Kashmir divisions to closely monitor the arrangements being put in place in transit camps along the yatra route particularly at Kathua, Samba, Jammu, Udhampur, Ramban, Baltal, and Chandanwari. He further asked them to work out a plan for regulating passage of yatries throughout the route from Lakhanpur to the holy cave and back, giving due consideration to the local traffic and movement of Kashmir-bound load carriers and trucks especially in the event of weather-induced blockade of the national highway.

The Chief Secretary reviewed in detail the facilities for safe, smooth, and secure movement of pilgrims particularly along the Jammu-Srinagar National Highway and Baltal and Chandanwari yatra tracks up to the Holy Cave. He also reviewed the status of track up-gradation works on Baltal & Chandanwari routes, improvements at the access control gates, establishment of temporary camps, shelter sheds, health/medical camps and Emergency Operation Centers (EOCs) at various locations, provisions of drinking water supply, lighting, LPG, ration, Medicine and mobile connectivity besides establishment of Joint Control Rooms as per NDMA suggestion.

Arrangements relating to scientific disposal of solid and liquid waste by Sonmarg and Pahalgam Development Authorities and the Shri Amarnathji Shrine Board (SASB) were also discussed at the meeting. The agencies were asked to install bio-toilets, waste specific garbage bins, mechanical segregator, auto-composter, and electromagnetic disintegrator at suitable locations on both yatra routes.

The Chief Secretary also reviewed arrangements with regard to registration and medical screening of ponies against Glander’s disease, establishment of pony sheds and veterinary camps, and rollout of pre-paid system for hiring of pony services.

To ensure timely completion of various works and arrangements to be put in place, he impressed upon the concerned departments to initiate the respective financial and administrative processes well in advance. The Disaster Management Department was asked to tie-up with the Information department to ensure that regular weather reports are broadcasted on the national media for information of Yatris.